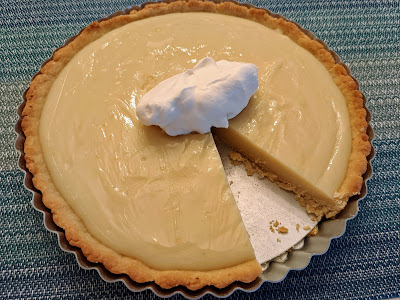 This pair of recipes were on the top of my list to make the second I went through the dessert section. Not only would it knock out two recipes at once, but it also fulfilled the first pie for the year (yes, a tart is a pie). The only problem I had was finding the thickening agent, agar agar. None of my local stores carried it so I has to rely on Amazon and this stuff isn't cheap. I paid $10 for a bag that will probably take me forever to go through. I may never get through it if I have the same issues I had this time.

I was excited to try using the agar agar for the first time instead of making a traditional lemon curd with eggs. Because eggs can start to cook easily when whisking them into the other ingredients, the agar agar replaces that to make things "easier". When making and tasting the curd it was great. I made it ahead as instructed by the recipe, but when I went to add it to the crust it was hard as a rock. Agar agar is basically vegan gelatin and it sets really quickly. No matter, it said I could heat it back up and add water. I did that and it helped get it to pouring consistency but then hardened right back up. Having not used agar agar before, I had no clue if the recipe called for too much or if the brand I got was just too strong.

What I was left with was a super thick curd that had a really good flavor, but a terrible texture and mouth feel. It was almost like chewing lemon flavored plastic. The only saving graces were my homemade whipped cream and the absolutely bangin' Brown Butter Tart Crust. Seriously, I considered removing all of the curd and just eating crust with whipped cream on it, it's that good.

I thought the technique of making the tart dough was rather fun. You put all of the ingredients in a bowl and stick that in a hot oven until the butter starts to brown. This makes it nearly impossible to burn, unless you just forget about it. When you take the bowl out, you add about a cup of flour to the bubbling mixture and it immediately starts to fizz. A few stirs and a couple more spoons of flour and you have a ball of hot tart dough. I got a tart pan for Christmas so I was happy to be able to use it already.

My picture looks fairly similar to the one in the book, but I can't imagine the curd was supposed to be like it was. After a few hours of eating it, Christine and I decided it wasn't worth the calories, so I threw it away. Not before seriously considering chipping the crust away though. I'll just make it again either with eggs or maybe half of the agar agar. Quite disappointed with the curd recipe but the brown butter tart crust is a keeper for sure.