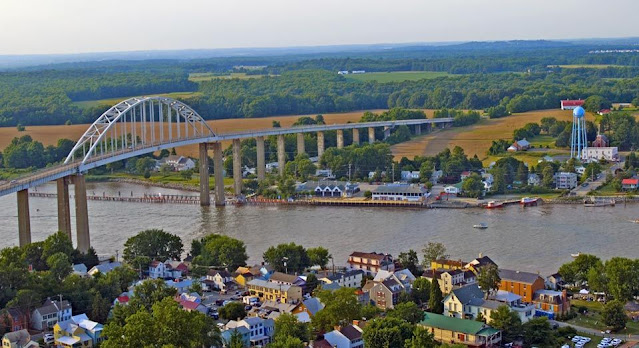 As I wrote in my 10 Years of Marriage post, Christine and I were supposed to take a trip this year. Obviously that couldn't really happen because of all the Covid-related quarantines and travel restrictions. We decided we did still want to get away for a couple days, so we were looking for places down by the beaches here in Delaware. Then more restrictions were put in place down there due to an increase of new cases. The fact that a ton of people would still be down there made me look elsewhere. So I hopped on Airbnb and started looking for smaller towns on the coastlines, that's when I stumbled across the Fairwinds Cottage in Chesapeake City.
Chesapeake City only takes 45 minute to get to through the back roads of Delaware and Maryland from our house in Clayton. It was a beautiful drive that didn't feel very long at all because we'd never been down many of the roads that we took. As you can see in the picture above, the town is broken up into two parts by the canal. The C&D canal is the whole reason Chesapeake City is even a place. Many of the early settlers were people who had a hand in the digging of the canal (some literally). With a population around 700 people, which is only half of its peak of ~1400 back in 1880, it's a very small town. But within the small town, there are a lot of gems that made our trip very special.
The first of those gems was the Fairwinds Cottage. We booked a two night stay from this past Monday through Wednesday. Before it became a short term rental guest cottage, it was originally built by the owner's of a local restaurant as a place to prepare their crab cakes. The new owners completely renovated the space and didn't leave out a thing. When you first walk in you enter into the kitchen and dining area. On the first floor there is also a very large bathroom. Upstairs is split into two more rooms, a living room and the bedroom. All of the amenities like a basket of snacks, full spread of coffee/tea options, bathrobes, and disposable slippers really pushed our stay to the next level. 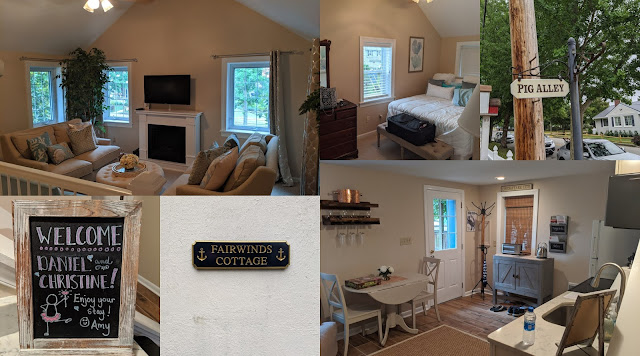 If we didn't have kids, this would be the perfect sized place for just Christine and I. I love the idea of a tiny house, like the one we stayed in the last time we were away from the kids, but the Fairwinds Cottage is really the smallest I'd want to go. The finishes inside were similar to those found in upscale hotels, but there was still a lot of old age charm. It sits on the north side of the town across the canal from downtown. It's just steps away from the 17 mile C&D Canal Recreational Trail which goes all the way to Delaware City and the Delaware Bay. It's a two minute walk to that local restaurant where the crab cakes would go.
There aren't a lot of places to eat, but the few that are there are very good. We ate dinners at Schaefers Canal House (just steps away from Fairwinds Cottage) and the Chesapeake Inn. Both of them are on the water, but on opposite sides of the canal so when you're eating outside at one you can easily see the other. Of the two, I think Schaefers is the better restaurant both food and view wise. Right in town is a small cafe called Cafe on the Bay that serves coffee and the best breakfast sandwich I've ever had. The Canal Creamery sits on the water and offered very much needed ice cream during a hot day. The only lunch we had was just outside of the downtown area at JoJo's Diner, where they serve typical diner fare. There are a couple other restaurants in town that we'd like to try at some point. 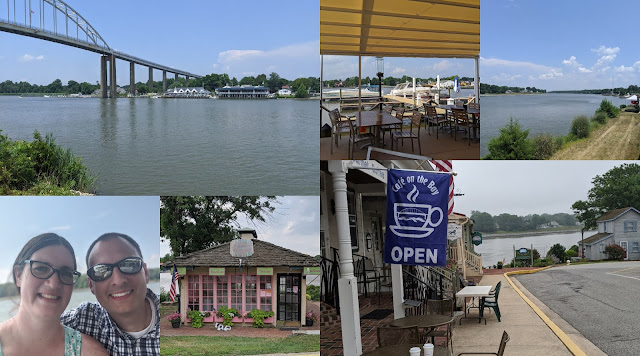 We hoped there would be a place to go swimming, but the the canal water is brackish and therefore isn't really great for that. But there are a couple of boat tour companies, so we did get to go out on the water for a little over and hour. Every time we spend time near or on the water, it just reaffirms that we really want to live right on the water some time in the future. Being able to sit out on some of the decks or piers that we saw has to be so relaxing. Relaxing is the perfect word to describe our trip. Spending some time in this sleepy canal town was just what we needed. Between the little shops on the main street in town, the restaurants on the water, and the cute cottage we stayed in, Chesapeake City is the perfect place to spend a couple days to unwind.
Coronavirus Food Life Marriage Sandwich Travel