If April was chaotic, May was absolute anarchy. The month flew by as time has seem to have lost all meaning. I spent a lot of time doing yard work and playing outside with the kids. I also started working out more than I have previously, but that's a post for another day. It was an okay month overall, but I'd like to get all three goals running on all cylinders at the same time.

2) Complete the 10 x 2 Board Game Challenge
I was hopeful for May knowing we'd be stuck home every weekend, but the kids just don't make gaming easy for us. I did get to play in person with a couple of friends who spent the night on their way down for vacation. Waiting for the kids to be asleep was key to making that work. Christine and I did play some games online with friends, but the kids spent the entire time running around and making too much noise. As for the challenge, we did get a single play of Warsaw: City of Ruins in yesterday. I like it even more at two than I did at four because it played so quickly. We're keeping this out to play soon, so the rules are fresh in our minds. The school year ends this month and things should start opening up, so perhaps we'll knock out most of the remaining 15 plays we have left during the summer. 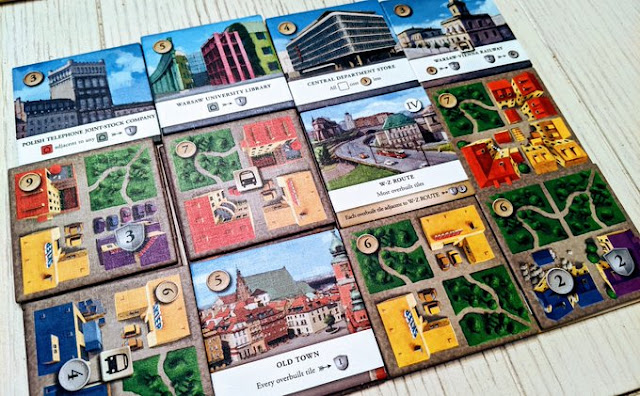 3) Bake at least 2 different baked goods each month
May was going to be the first month that I'd get to use my new hi-gluten flour. I made a few bread products, most worked and one didn't turn out great. The first thing of the month was a standard sourdough loaf that I've made many times now. You can see I missed an air pocket when shaping, but it tasted amazing. The combination of the hi-gluten flour and my ever developing sourdough made for a tasty loaf.

We ate the last of our frozen bagels from NY months ago, so it was time for me to make some more of my own. In previous attempts, I've always had to shape the bagels the day I was boiling and baking them, but I've always wanted to shape them before an overnight rise in the fridge. It's a trick I've seen done by professional bakeries that I haven't been able to do because my fridge has never had enough space for two sheet pans at the same time. Well guess what? Our new fridge is deep enough and has enough shelves to make that work. I took some cooling racks and stacked the two pans of shaped bagels in the fridge overnight. I don't know if it make a ton of difference in the end product, but it did make things a lot easier the next day. One pan got topped with Everything bagel topping and the other some shredded Mexican cheese mix. The flavor, like the bread above, was better than any batch I've done before. Before freezing the remainder for future breakfasts, I cut them almost all the way through which makes defrosting and toasting them really easy. 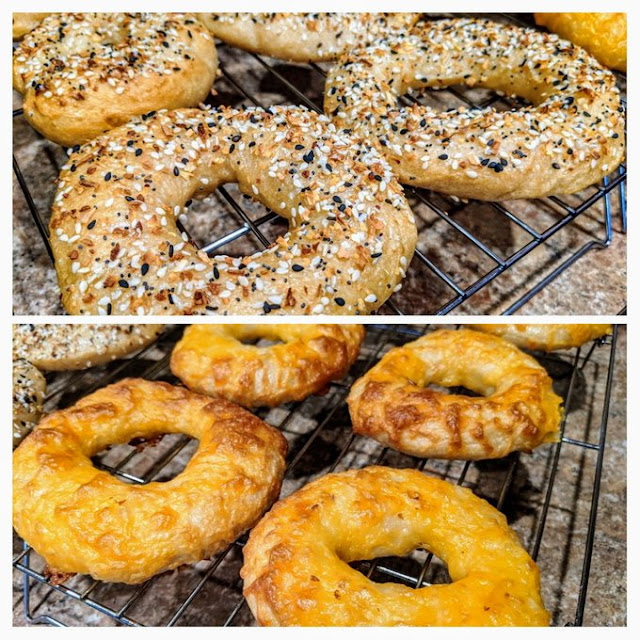 It had been a while since I made pretzels and I wanted to do that again. I sort of hodge-podged a recipe together and they came out pretty good. They certainly weren't anything to look at though. I attempted boiling a few but they fell apart or bloated up worse than the picture. So instead I brushed them with the baking soda and water solution to try and get that traditional pretzel color. I was dubious that it would work because the ratio was so far off others I've used before, so I brushed them with egg yolk as suggested in another recipe. I don't think I'd do that again though. They did taste pretty good, especially after toasting them in the air fryer for 5 minutes. 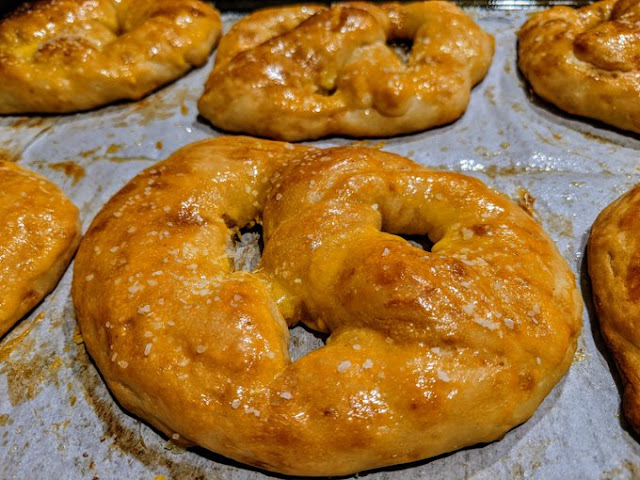 I attempted a no yeast, all sourdough set of loaves that took two days to make. They didn't rise nearly as much as I was hoping they would in the oven and ended up being way to dense. They were edible, but I was so mad about it that I threw them away. Not wanting the weekend to be a total bust baking-wise, I had Grace help me make some chocolate chip M&M cookies. We always have at least one family size bag of M&Ms in the house for the kids. When I went shopping this week to replenish our stock, they only had the party bag which is significantly larger. The back of the bag has a recipe for M&M cookies, but I used this one because it sounded better. Grace did a great job reading through the recipe and listening to how and why we do things in certain steps. She was constantly checking to see when they were going to be ready to eat and certainly wasn't disappointed when they had finally cooled down. Christine described them as "dangerous" and I would completely agree. The base recipe is a bit different from a standard chocolate chip cookie recipe. They're a bit lighter and having the chocolate chips in addition to the M&Ms just packs them with chocolate. 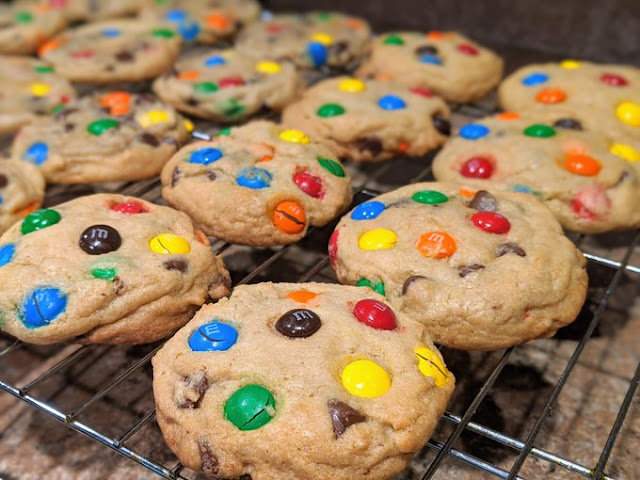 I had a hankering for pizza, even though we order it every Friday, so I took out the two pieces of sourdough dough that I froze from last month. I was interested to see how they're react after being frozen, but I didn't notice any difference once they thawed and risen some. I'm getting more and more confident with shaping and tossing the dough and I've got the baking set up in the oven down perfect. 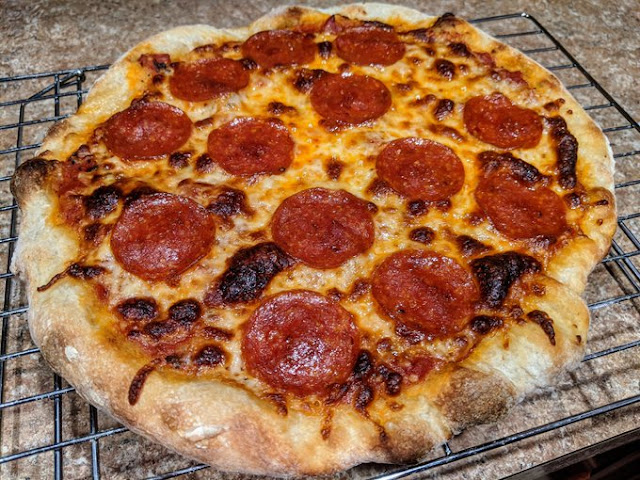 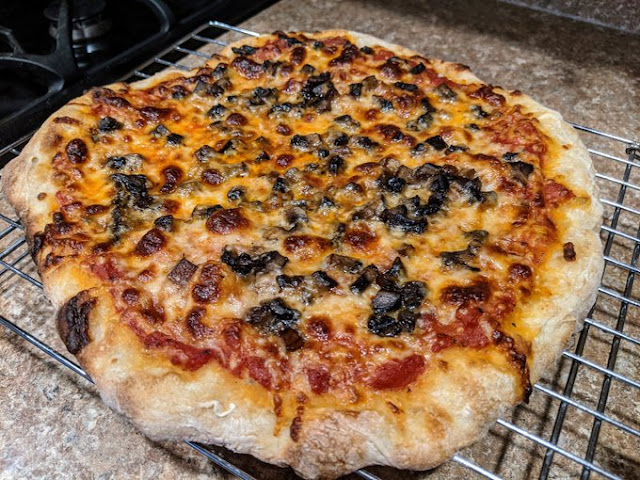 Some weekends I just don't know what I'm going to do with my sourdough discards, so I'll just feed Lucille and let the discards rise a bit while I try to figure that out. This past weekend I decided to make biscuits and then Christine suggested sausage gravy, so that ended up being dinner. I really love the way that they taste and smell. They're not as tender as a buttermilk biscuit, but they're a great alternative nonetheless. 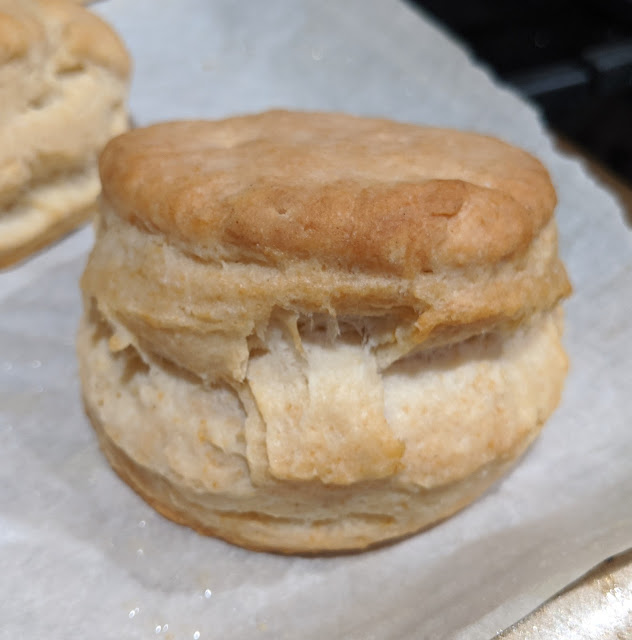