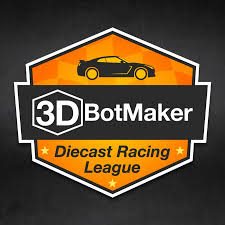 A few months ago I wrote about my new favorite sport, Marble Racing, something that I'm still very much into (Go Hazers!). Shortly after I got really into watching marbles zoom down sand courses and around formula-1 style tracks, I was turned onto another racing channel. 3DBotMaker is a youtube channel that does something similar to Jelle's Marble Runs, only with 1/64 scale diecast cars. Now I've never been much of a car guy, but my brother and I had hundreds of these diecast cars when were were kids. We'd spend hours making ramps and courses to race them. So naturally I took to watching this after seeing a single race.

The ascetics and courses have gotten better and more complex each season. What used to be just plastic track in a room has now become an incredibly elaborate set up with lots of detail using the scenery you'd see on a model train table. Another addition to the production value is a pair of announcers who do commentary on the race, much like what's done on the Jelle's Marble Runs channel. They add story lines and humor to the mix so it's not just watching metal cars go down a track. Making it feel like a televised sport really helps immerse you into the races.

There are three different racing series so there is a constant stream of content being put out each week. There a bunch of Tournament Stock Series that race different types of the same style of car. The King of the Mountain is a modified diecast tournament of cars of all shapes an sizes. Then there is my favorite of the three, the Diecast Rally Championship which is Rally style cars racing on a partial dirt track. Because a single race is less than 30 seconds long, they're quick and exciting. See for yourself:

As traditional sports are still trying to find a way to get going again, I'm happy to have non-human based sports like diecast car racing from 3DBotMaker to watch. If there are any other racing leagues or sports that are out of the ordinary, please share them in the comments below. I'm always on the lookout for something new and different.