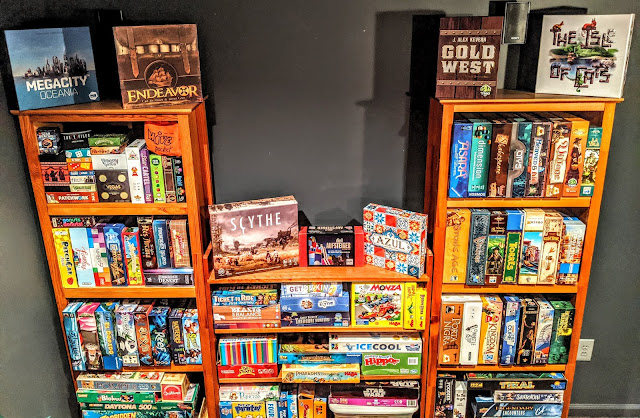 Back at the end of 2018, I had the crazy idea of culling our collection down to just 54 games. Since that time, I've determined that I'm not quite ready to make the hard cuts it will take to get that low. Part of it is that it's not just my collection. There are games Christine really enjoys that I wouldn't think to get rid of unless she loses interest in them. Another part of it is that I do enjoy trying new types of games or the games by my favorite designers. Unless Christine or I absolutely hate a game, it tends to stick around for a while and inflate the overall total. I know that I could be more stringent with how I deal with what stays and what goes, but it's not like I'm hurting for space or anything.

Currently our shelves are pretty full, so I'm using their capacity to keep my acquisitions in check. There are loopholes I could use to get more games, like stacking games on top of the shelves (yes, I know I did that in the picture) or buying smaller boxed games that take up less space. However, that defeats the purpose of trying to curate the best collection, for us, that I can. Not sticking to my original plan of 54 games is sort of moving the goal posts, but as happens often in life, things change. One thing that hasn't changed is that I still don't count kids games in our overall total. They have their own collection that has exploded over the past two years, but dealing with that will be a post for another day.

For the time being I'm setting a tentative and arbitrary cap of 100 games for our collection. This was the number I aimed for years ago, when I realized we just had too many games for the time that we had to play them. Circumstances have changed since then, as you have seen if you read this blog, but that doesn't mean we need to have more games. I just want to have a collection of games that we truly enjoy. Finding games I can get to the table regularly and will also be enjoyed by the most number of people takes a lot work. But I do enjoy doing the research necessary to make that happen.

Enough blabbing, let's get down to some numbers. Totals for each year do not include expansions, promos, or kids games. Kids games are anything that was bought for or given to them. There are many of those games that I will gladly play with adults (ICECOOL, Drop It, Rhino Hero, UNO, etc.), but for tracking purposes they aren't included because they aren't ours (technically everything is ours, but now we're getting off track again).

As you can see, the collection has shrunk some and it will continue to do so. I would be surprised, if in a year or so, that it's down 20 or more games again. Approximately 100 games may be the sweet spot for us, but only time will tell. Keeping it around that number ensures that we won't have a bunch of unplayed games. Which means we'll finally be playing the games we've played before more often. Just recently we played Village for the first time in 3 years. It was only our second play ever and I really regret not getting it back to the table sooner because I love it. Being able to do that with more of our games is going to help shape the collection going forward.

There's no way to know if I'll stick to this new plan or not. If I had to put money on it, I would say that it's pretty likely that I will. I don't envision ever owning a significantly higher number of games unless my views on minimalism and intentional living change. However, I don't think I want to put any hard rules into place either. Board games are supposed to be fun and building/curating a collection of them is part of that fun.

Do you have any rules for your collection? Please share them in the comments below.
Minimalist Tabletop