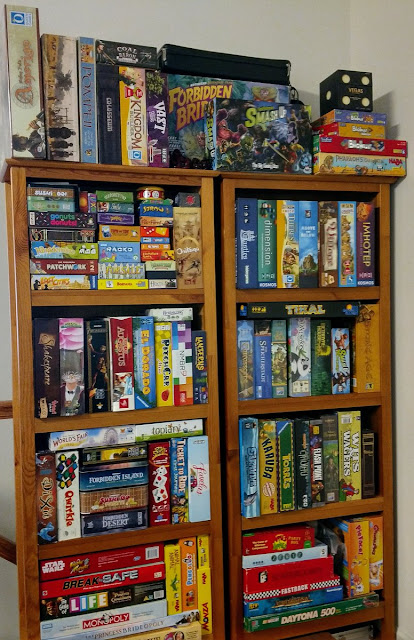 In May 2017, I had 129 board games (not including expansions or kids' games). As of today, I have 109. I think I've done a okay job curating my collection as I intended to do after writing this piece.

Now I'm going to do something more drastic, cut that number in half.

Why that amount? Why do this at all? First, the number (54) is arbitrary and will likely change to a lower number in time. Also, what I don't have is lack of space or an emergent need for money. What I do have are other issues. The major one being lack of time to play; I'm lucky to get a couple days a month. Even then, maybe one to three see the table each time. Seeing the games sitting on the shelves, multiple times a day, creates stress & disappointment. Knowing it will take literally years for some of them to get played again weighs on me.

I want to play all of my games, but not everyone else does as often or at all. So keeping some of those games just doesn't make sense, not right now anyway. Culling my collection down to what will really get played and what I really enjoy makes sense to me. I've come up with a lot of "maybe I'll play this" scenarios to justify keeping games that have no chance getting played in my current situation. That ends today.

It's not going to be easy to kill some of my darlings, but it's necessary. Some games will be sold or traded, while others will be donated or trashed. Expansions and promos won't count towards the total because they're already in the base game box. I was planning on cheating by putting small box games in my Quiver Case & counting that as one game, but I've decided against that (anyone looking to buy a Quiver? I'll make you a great deal!). Once I get down to 54 games, I'll implement a strict one in/one out policy.

But before we get to all of that, I need to come up with the right way to select what gets to stay. Do I just keep my top 54? Do I eliminate all games where somebody else has a copy? Do I want a well rounded collection of player counts and mechanics? How many of a certain mechanic (i.e. worker placement, trick taking, dexterity) should I keep? Am I willing to get rid of some of my favorite designers' games? Or should I build starting with those?

Once I build that template and select the games that will stay, the culling with commence. Ideally, what I am left with will see the table more often. If we burn out on something, there are many games that can take its place. I briefly thought that this project may blow up in my face and cause quite a bit of regret. However, even if it does, I can always buy more games. There is nothing holding me to the rules I'm setting for myself.

In the coming weeks, I'll probably do a handful of posts discussing the process, what gets to stay, what had to go, and why. If you've ever done a drastic culling like I'm about to do, I'd love to pick your brain a bit. Post a comment here or send me a direct message on Twitter.
Life Minimalist Tabletop