We've been in Delaware going on 8 years this August. Roughly a year after moving to Dover, we bought a new build townhouse in Smyrna. Our current home has served us well, but since moving in our family has more than doubled in size. We have more than enough room for everyone, but the set up of living on three floors is less than ideal. Coupled with not having a suitable yard for the kids to play and the congestion of the streets in our community, we felt the need to look for a single family home. Not only did we want a single family again, but I even suggested moving out of state for a change of scenery. After some very serious discussions and looking at the costs to leave Delaware, we ultimately decided that we'd stay...for now. Christine and I would like to move when the kids get out of school, but that's a post for another day.

For the past two months we've looked at homes in Smyrna online and even went to see some in person. I wasn't really that interested in selling our house for another year or so, but I was willing to at least see what was available. Because of my lack of interest in moving just yet, I was incredibly critical of nearly every home that popped up as a recommended in the home search apps we were using. When we saw houses in person, I was quick to tear them apart over crappy kitchens, less than ideal backyards, and anything that I thought went against our wishlist items. We weren't even pre-approved yet and our house wasn't on the market so I could have kept this going indefinitely. That was until we found a ranch style home in Clayton, about 5 minutes from our current home.

From the pictures online, I wasn't sure it would work for our family. I agreed to see it after we looked at a different house in Smyrna that seemed like it would suit us better. The first home was a bit of a disappointment due to the kitchen finishes, tiny backyard with no privacy, and the ridiculous amount of cars parked on the street despite two car garages and four car driveways. Then we went to the house in Clayton that's in a development that saw a few houses built before the developer went out of business. A new developer has taken over and houses are going up fast. The house we were going to see was one of the older ones, but it's only 11 years old. I wasn't that impressed at the outside because both the siding and trim is a very boring brown color, but the yard was nicely landscaped and maintained.

Once we went inside, it became apparent very quickly that this house could really work for us. As we moved from room to room, there were all sorts of little things that the current owners had done that made the space better than almost every home I've visited. Of course it didn't come without a few negatives, but they are things that I was willing to overlook or knew we could change in the future. The open floor plan, being nestled at the end of a dead end street, a fenced in yard with a two tiered concrete patio, the gas range and French door fridge in the kitchen, and the long list of things they were leaving were all more than enough for me to seriously consider making an offer. But there was one more thing that the house had that really sealed the deal. I could just tell you, but why not show you instead? 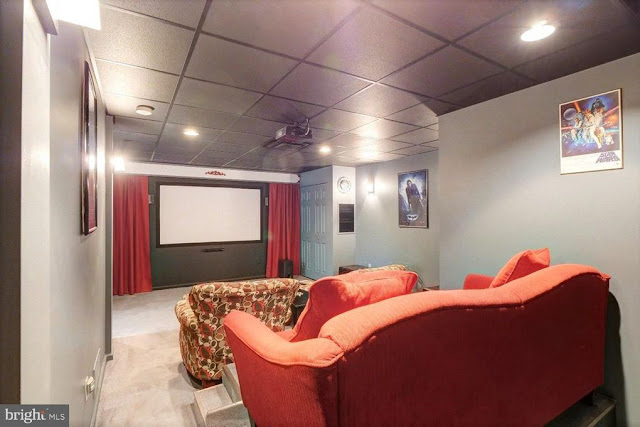 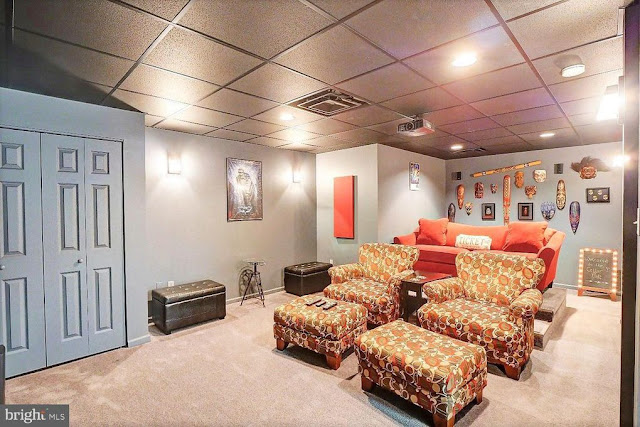 How freaking cool is that? Everything but the wall hangings stays. I never thought I needed such a room in my house, but now I don't think I want to live in one that doesn't have a similar setup. The house had been listed for less than 24 hours when we saw it, so we put in a strong offer and after about a week of back and forth, we were under contract. That was the easy part, now we had to sell our house that was a) not yet on the market and b) in absolutely no condition to be shown.

We spent every waking moment for nearly three straight weeks, including last week when I was off during Christine and the kids' Spring break, trying to get the house in the best shape it could be. We had to list right after our offer was accepted so Christine and I took a day off from work to bust our asses doing as much as we could to get the house looking presentable. We scrubbed the boards on the deck, cleaned out the garage, and removed stuff from every surface throughout the house (the minimalist in me was in pure joy throughout this process).

Our late cat, Spot, left us with an issue that we thought would cost us a lot to fix. He had a congenital sinus issue that caused him to sneeze snot all over the walls and even coarse sand paper wouldn't take it off. Having it scrapped off and painted over seemed to be the only fix and it was going to be very expensive because most of our walls were marked up from it. However, on a whim I tried to use a baby wipe to see it would work and to our surprise, it did. Of course this meant I've probably spent close to eight hours total scrubbing the walls of our house, but it saved us thousands so I'll take it. Whoever invented baby wipes, I love you.

We had a couple showings, including one the day after we listed, in the first week. There wasn't an offer from either of them, but we were very hopeful after the quick response to see our house. Then we went nearly two full weeks without anything. No inquiries, no showings, nothing. Because we have a hard closing date of June 10th, everyday without an offer or even a showing was excruciating. We were definitely getting stressed out but our realtor, Mark Baer, kept us calm and only asked that we trust him. We had done everything we could do, we just had to be patient. After dropping the listing price and scheduling an open house for this past Saturday, we had hoped to see some interest but nothing happened until Friday night. We got two requests for showings before the open house, so between those and what we assumed would be a good open house, we were confident we'd get an offer.

Just when we thought we were in a good spot, on Friday another house in our neighborhood went on the market. It was in the building right next to ours and we knew that had been doing a lot of work on theirs in preparation to list it May 1st. When we scheduled our open house, they did the smart thing and listed so they could possibly get some of the traffic that was headed our way. We went through a few emotions, but as the day went on, accepted that we would have done the same thing. Now we'd just have to wait and see what happened. Saturday came and we took the kids to my dad's for the day while Christine and I went to play board games with friends as a reward for working so hard and to get our minds off of selling the house (this didn't really work because we were both checking our phones constantly).

We heard nothing after the first two showings and the open house started off rocky with nobody showing up in the first half hour or so. We texted a bit with our realtor after getting home and enjoying the left over cupcakes he'd bought from Kee's Cupcakes for the open house. There weren't any offers yet, but he had a good feeling about the buyers that had been through that day. Just as we were about to call it a night, we got a text that an offer was coming through. It was already late, but we stayed up until they sent it. We couldn't believe the offer we got because we expected a bit of a low ball with a lot of seller assistance, but instead we got a full price with just some seller assistance. We jumped all over it, accepting and signing the offer that night.

So that brings us to today. Assuming everything goes well over the next month with our buyer's home sale and the sale of our home, we'll be closing on and moving into the house in Clayton just before the end of the school year. We'll get to enjoy the entire summer in our new home and I honestly can't wait to get into our new space. We're hoping this new house will serve us at least as well, but hopefully better, than our current one until the kids get through high school. We're looking at it as our "until retirement" home, but we're definitely not looking past enjoying it for the next two decades or more.