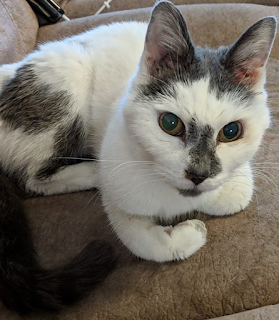 Yesterday, we recently had to make the tough decision in putting our oldest cat, Spot, down. His health has been deteriorating rather rapidly over the past few months. He lost a lot of weight, had a drastic change in personality, and started experiencing some other health problems right near the end. He was a good cat, even if his dried snot is all over our walls. Seeing those yellow bits of now concrete stuck to the drywall will serve as a tiny reminder that he was here.

For those of you who don't know the story, we adopted Spot when he was around 8 years old through Purr-fect Haven Cat Rescue. They are the same agency that we've since adopted Atreyu and Albert (a.k.a. Fatbert). When Christine and I came down here for the interview that would ultimately land her the job that brought us to Delaware, we visited PetSmart because we had some time to kill. Spot was 7 at that time and Christine felt so bad that he was as old as he was and that he had never have a true home. Fast forward to a little over a year later and he was still there when we went in to buy food for Tara, our first cat. Christine was pregnant with Grace at the time, but begged that we give him a proper place to live. I ultimately agreed to adopt him and that's how he became ours.

He was rather unassuming and mostly kept to himself. I'd yell at him whenever he'd start his rapid fire sneezing fits. It rarely stopped him from shooting snot everywhere, it's not like he could help it. But all in all he was a good cat. A good pet for the kids, even if he wasn't the cuddly type until very recently. I never had the connection with him that I had with Tara and I certainly didn't think I'd get as emotional as I did when we decided to have him put down. Even now, I'm having a hard time seeing what I'm typing through the blurriness that budding tears has created.

Spot, you were a good cat and you'll be missed.
Cat Life