It's been half of a year and I'm nowhere near stopping on these resolutions. Now that I'm past the halfway point, it should be smooth sailing to the end of the year.

1) Bake more bread from scratch
We were down to just one serving of tomato sauce left in the freezer, so I made more a few weekends ago. When I make sauce it only makes sense to have pasta for dinner that night and what goes great with pasta? Garlic knots! These things are ridiculously easy to make and came out really great. I found a recipe that quickly showed that it wasn't going to work but I was able to fix it. The 1:1 ratio of flour to water made no sense so after doubling the flour and adding a little bit more during shaping, I got the consistency I wanted. 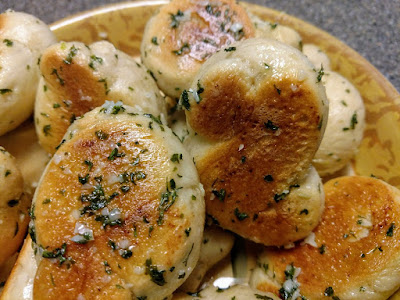 All you knead (haha) to do it make a pizza dough, cut off pieces to roll into a rope, and then knot them. After they came out of the oven, I tossed them in butter, garlic, parsley, and salt. I think I'll start making these more often or at least make a big batch of them and freeze the uncooked dough so I can pull a few out and pop them in the oven whenever we have pasta.

I had hoped to do some more bread baking but between being busy and the oppressive heat, that didn't happen. July won't be better from a heat standpoint but I've got a few recipes I want to try. Next month should be better.

Scythe
I won a copy of Scythe a few months ago through an online giveaway. I didn't think it was a game I need to have or even play but it was free and is very well regarded (ranked #7 on BGG at the time of this post). It's a heavier game with a lot of rules to learn. After watching the how to play video five times, I felt confident enough to teach it. The goal of the game is to have earned the most money when the end game is triggered. There are 10 objectives, that once completed, allow a player to put on of their 6 star pieces on that space. The second a player places their sixth star, the game ends immediately. The entire game is built on engine building, meaning as you do one action it'll let you do more actions, sometimes for less resources. The more efficient you are, the better off you'll be. 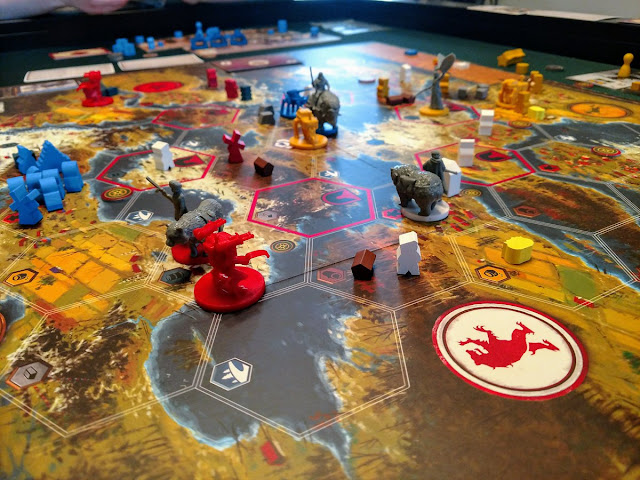 Area control also plays a huge roll in the game because the resources you spend to do actions must be pulled off of the board from space that you control. So it's possible for you to lose a space with much needed resources after a battle. What I liked about the end game condition is that battles only allow you to place two stars total so you have to do other things. Finding the six or seven things you can excel at is key. If you try to do too much, your engine won't be running at full capacity and you'll fall behind. I was able to pull out a victory without deploying a single mech. Mechs both initiate battle and carry your workers around the board. There's more to the game that I'm not going to cover but I do want to mention that the production value is top notch. There are all sorts of bits, miniatures, and nice cardboard components. I'll definitely be keeping this one.

Kingdom Builder
A while ago I added all of the previous Spiel des Jahres winners to my wishlist. I removed a bunch of them when I purged that list, as I try to curate my collection to games I know will get played. Kingdom Builder, SdJ winner of 2012, was one of the games that stayed on the list. I found a cheap copy that came with three expansions and two mini expansions for less than the price of the base game, new. The game is on the lighter side, much lighter than Scythe, but very enjoyable. The goal of the game earn the most gold by placing settlements on the board. There are two ways to earn gold: 1) have a settlement adjacent to a castle (as seen above) 2) place settlements according to the scoring objectives from the three goal cards drawn during setup. Players draw a land card, place three settlements on that type of land on the board, and then draw a new card. 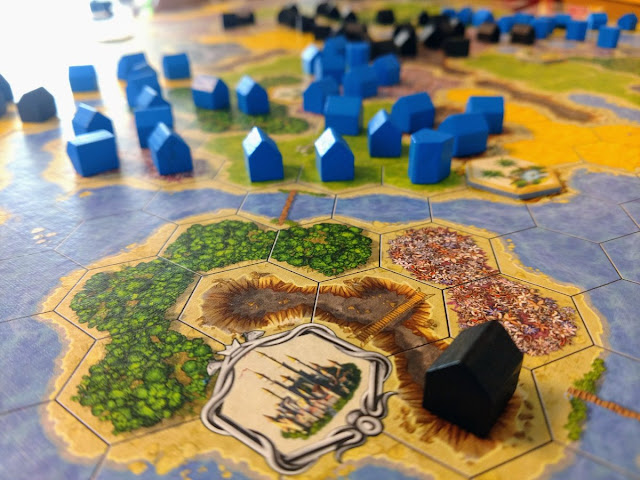 The twist in the game is that all of your settlements must be placed adjacent to one another if possible. If I play a plains card, I have to place my settlements in a section of plains where I already have some or next to another type of land where I have settlements that's adjacent to a plains section. If that's no possible, I can place them in any plains section on the board. After the mandatory action of playing the land card, if you have collected a territory bonus action, you may do that. These bonus actions let you do all sorts of things like move your settlements and add new ones. There is some element of luck based on what land cards you drawn but the bonus actions help mitigate that. Christine and I both enjoyed it. I can't wait to play again, even though I got stomped 63-39. With all of the base game combinations and then the added expansion content, this has a ton of replayability.

3) Meditate on a regular basis
I completely fell off the wagon on this one. I can count on one hand the number of times I took to meditate. It's no surprise that I slept worse and had a much shorter fuse because of it. In the last week of the month I got back to it but I'm upset with myself that I did so poorly with this one. I knew this would be the hardest one to keep up with. I just need to do better. 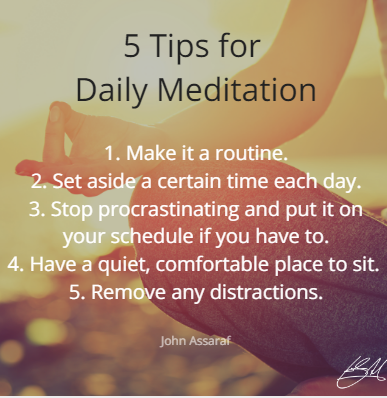 For any of you who meditate daily or at least often, do you have any tips for sicking it with it that really work for you?
Bread Buddhism Life Resolution Tabletop