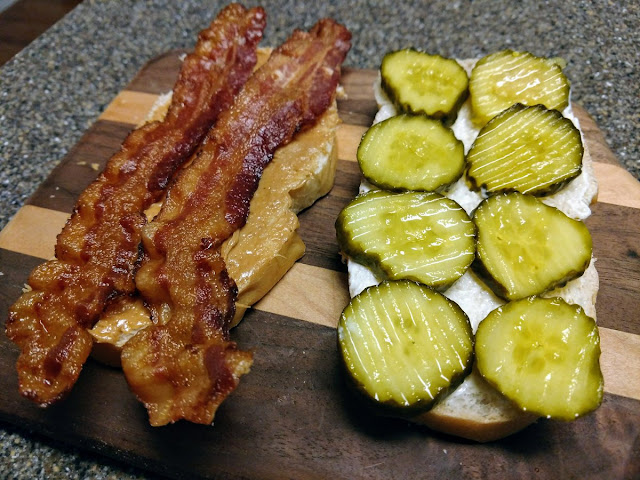 I follow author, Chuck Wendig, on Twitter. As of the writing of this post, I have never read any of his books. The reason I follow him stems from the hilarious conversations he has with another author that I follow but haven't read, Sam Sykes. He also tweets out a lot of funny material and some great photos. About a month ago he wrote this post on his site about a sandwich that the New York Times published, a pickle and peanut butter sandwich. He tried it but that was just be beginning.

Since then, many of his fans have tried the evolved version, The Wendigo, that adds both mayonnaise and bacon. I've seen dozens on photos in my Twitter feed about it and since I'm such a lover of sandwiches, I have to try it. Now I've had peanut butter and mayonnaise before because that was another oddball that people say everyone should try. I've even heard of the sandwich that the NYT wrote about; it's popular among pregnant women apparently. But this combo seemed quite strange.

I'm not going to break down why the ingredients should work because Mr. Wendig does a great job in his post. Seriously, go read it if you haven't already. We happen to keep all of the required ingredients in our house at all times, so there was no excuse not to combine them into something that could taste great or give me nightmares. How did it turn out?

It was....pretty good. Christine saw me folding it together before my first bite and looked horrified. I wasn't sure how it was going to taste, but after a couple bites it all made a lot of sense together. As you can see in the picture, I used Italian bread which was fine but a different type of bread could really elevate this thing. There have been a few different variations of each ingredient like spam instead of bacon, chunky peanut butter instead of smooth, all sorts of different types of pickles, and many others.

If you love sandwiches, I would say this is definitely worth a try. Would it have made my Top 10 list? Probably not, but that doesn't mean it isn't good. Who knows, maybe a variation or combination I can find will get it there.
Food Internet Sandwich