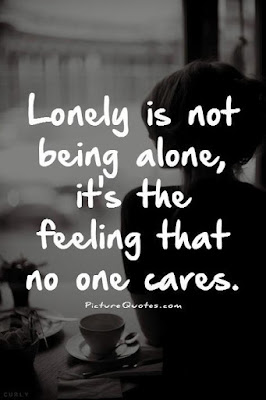 I'm surrounded by people for nearly every minute of every day. I wake up next to my beautiful wife and always happy son, James. Ben sleeps a little over a foot away from us in his toddler bed. Down the hall, Grace is sprawled across her queen sized mattress. Somewhere in the room, at least one of the cats is huddled against the wall waiting to be fed. I'm conscious and surrounded by love.

During the week I drop Christine off at work, it's at this time that I'm am physically alone. The twenty to thirty minute drive to and from work are the only portions of my life where I'm not interacting with anyone directly. Once I'm at work, I have co-workers and work friends that I talk to about work and whatever else. I normally leave at 3 to pick Christine up and then we're back together as a family just a few minutes later. By 9 p.m. I am technically alone as the only person awake but I'll be asleep within the next hour, maybe two.

On the weekends, we either spend time as a family at home or go out to hit up the pool or spend time at the park. Some weekends Christine and I are lucky enough to spend time with friends while my Dad comes over to watch the kids. We play games, share stories, do the things you do with friends. It's the interaction that I crave with every fiber of my being. I can't be left to my own devices to entertain myself. I'm an expert at wasting time and finding things to pass it but interaction is an absolute must for me.

I talk to my friends via text message, Facebook, and Twitter. I interact with strangers, and some people I've met in person from Twitter, daily. I reach out. I ask questions. I try to start a dialog. I need somebody to talk to. It doesn't matter what the subject is. I'll talk about board games or food or politics or the news or anything anyone wants to talk about, given I know anything about it just so I can contribute something. Hell, I'll even talk about something I know nothing about just so I can learn more about a topic.

So why is it that I feel so lonely when I have a family, friends, and a plethora of strangers that are around me constantly? I don't mind spending time by myself. I actually cherish the hour or two a day where it's just me. But on the flip side, I need interaction. Despite being around people all day and having Twitter open on my desktop or phone for most of it, it's not registering. I don't know why it isn't. Maybe it's me not trying to make it register. Maybe it's not the kind of interaction I think that I need. Maybe it stems back to struggling to find purpose. What ever the reason, I have to find a fix.

Not feeling engaged or fulfilled is a primary reason for feeling lonely. As is spending too much time on social media. Posting something and just waiting for a like or reply to get the emotional response your body wants is excruciating. It's not that much different than I was as a kid. I needed constant attention. I'd follow my mom around the house and go on and on like kids do. Once my brother was old enough, I looked to him to play with me. He was happy to play by himself, especially because I liked to roughhouse, but I definitely was not.

The day I started writing this post I was definitely not in a good head space. Now that I'm finishing it and not feeling the same way today, it doesn't change the fact that I have the feeling of loneliness semi-often. That feeling seems to come in and out like the tide. One day I'm fine, the next day I feel so isolated and get can't out of my own head. Maybe this is just a phase of my life where having the young children doesn't allow for as munch personal than I'm used to. That probably explains why the feeling has intensified over time.

Recognizing that this is a problem is just the start to fixing it. But like other problems that I deal with, like weight gain, I actually have to try and fix it. Writing this was very helpful because I felt better the next day. But who knows how long it will be before I'm staring off into space while the world continues on around me.
Health Life