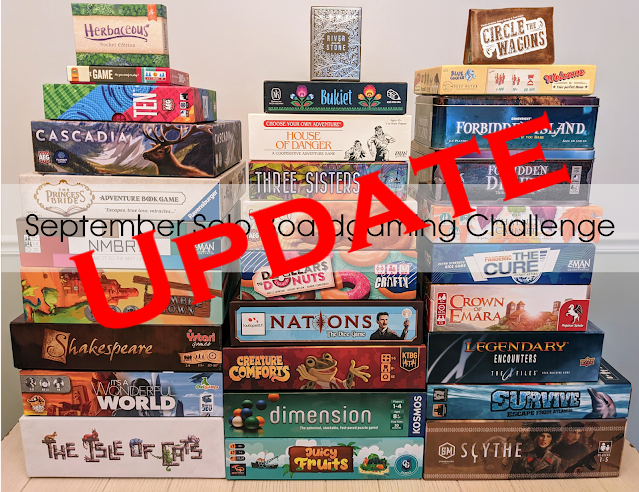 The month is over and I'm happy to say that I completed this challenge. After not being able to play games much in the six months prior to the start of the challenge, I needed to do something. Out of desperation, I came up with this and it really invigorated my interest in the hobby. I've always really enjoyed games, but it's easy to not want to consume any content related to something when you don't participate in it for a long period of time. What surprised me the most was just how much I enjoyed playing games by myself. If I had my choice I'd still like a living opponent, but it was nice to spend some time each day just focused on a game.

Just looking forward to sitting down and playing each day did wonders for my mental health. What also helped quite a bit was finding a whole new community to interact with. BGG has hundreds of guilds (basically groups) for a variety of interests, both board game related and not. There is a 1 Player Guild that is dedicated to all things solitaire gaming. Their motto is "Together, We Game Alone", which is totally spot on to what they we do. I began posting on the forums there and in the monthly Geeklist, which is a collection of games that people have played and written a little bit about. People there were/are so friendly and welcoming. I learned quite a bit about many games that I had never heard of and some that I own.

So is solo gaming for me? I definitely think it is. As I said, I would prefer a live opponent but solo gaming is a nice change of pace and almost meditative in a way. It leading me to find another part of the tabletop community that I can be a part of is more important than the gaming itself.  I was really into the game design and thrifting groups years ago, but have been aimlessly hanging around BGG for the past few years. I'm excited to hang around in this new group and focus on playing solo fairly often.

I wasn't sure if I wanted to rank or review each game I played when I started, but how each game went and a general feeling of each came out organically in my Solitaire Games on Your Table September Geeklist posts. You can read about each one by clicking on the links in the list of everything I played below.

September 11 - The Whatnot Cabinet

September 14 - It's a Wonderful World

Little did I know that the 1 Player Guild hosts Solotober, which is basically the challenge I just completed. This is the second year and I've decided I will participate and keep thing daily gaming thing going. I won't be playing a different game each day, instead I will play a small few a bunch of times. There may or may not be a blog post about those results.