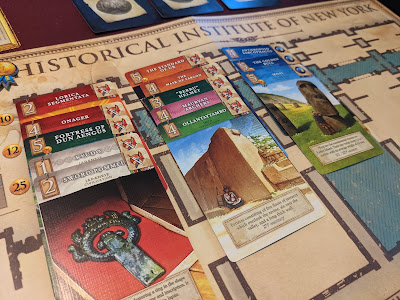 Another one of my super value clearance buys was Museum, a card collecting game of drafting and set collection. It retails around $50 but I was able to get a copy for only $10. I figured it was definitely worth a shot, as I had it on my wishlist at one time previously. Players act as curators of their own museums trying to collect and display relics in their growing collection. Beyond the value on each relic added to a player's collection, there are a many other ways to score at the end of the game. The player who creates the most valuable collection is declared the winner.
At the start of a player's turn they draft a card from one of the four continent decks and add that card to their hand. Then they have two options: furbish their museum or perform an inventory. If a player chooses to furbish their museum, that means they're adding something to their museum, either a relic or an expert. In either case, they are spending the value of relics in their hand to pay for them. When purchasing from another player's common pool, a prestige point needs to be given to that player. To perform an inventory, the player collects all cards in their common pile and adds them to their hands. This allows a player to purchase more relics on future turns while also keeping other players from buying relics they want/need. At anytime on their turn, a player may play a favor card which gives them some sort of one time special ability. Those are earned every time a player moves past scoring marks at 10, 20, 30, etc..
Throughout the game there are a few events that effect what cards are available from them continent decks. Public Opinion cards automatically reduce a continent's selection by one when drawn. Five of these cards get shuffled into each deck and act as a way to force players to not keep drawing from the same area. They also cause any player with relics from that continent to lose points if they are still in their common pool at the end of the game. At the beginning of each round, a headline card is revealed which will either increase or decrease the available number of cards from specific continents.
When one player has crossed the 50 point mark at the end of their turn, the game ends after each other player takes on final turn. Players then rearrange their collection to score the most amount of points from the relics and experts they collected. Players score for the number of cards from the same civilization that are adjacent, number of cards from the same domain that adjacent, the patterns on the gallery board (if applicable), their unique patron card showing a specific way to score, and prestige points earned throughout the game from other player's actions or favor cards. Players then lose points according to the public opinion tokens (if applicable).
I thought the game way okay and only realized as we played that the rulebook is a hot mess. Come to find out, there was a second edition that fixed this and balanced a bunch of problems found in this first edition. I liked the puzzle aspect of trying to score my patron card while also trying to score in all of the other ways. However, the messy rulebook really took away from the overall experience. I don't think I want to play this edition again, so it's on the for trade list already. It's a shame because the artwork is really beautiful. If I can pick up the second edition on the cheap, I'll definitely pick it up. It
Review Tabletop