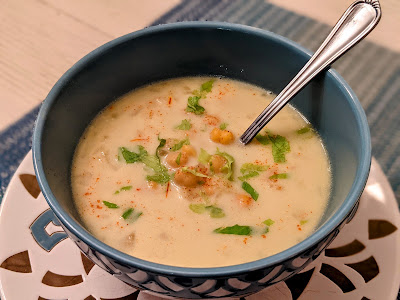 As the weather gets cooler we're starting to settle into soup season. On a particularly rainy day I decided to make the Chickpea Stew recipe as part of our "bowls" dinner of the week. I was dubious that this was going to taste great but tried to keep an open mind. That being said, we had leftover homemade pizza in the fridge that I got ready just in case this was a miss. It's a fairly simple soup that doesn't require a lot of ingredients but does take a little more cooking technique than just chopping and dumping like many soups require. The creaminess of this soup comes from tempering eggs that have been whisked together with yogurt. To do this, you have to slowly pour in hot broth into the mixture while continually whisking. If done improperly you can end up with scrambled eggs. It might sound scary but the yogurt helps aid in keeping that from happening.

After making the initial broth with sautéed onions, chickpeas, vegetable broth, and garlic, the tempered egg mixture gets stirred in and cooks until it thickens slightly. A little paprika and cilantro gets sprinkled on top. I used celery leaves because cilantro isn't a favorite in our house. I had a few spoonfuls but found the soup rather boring. Christine agreed and we decided to pass and just eat the leftover pizza. Like some of the other soups I've made from the book, it just needs more. Neither of us like whole chickpeas so their off-putting texture certainly didn't help. I was really bothered that for the second time from this cookbook that I had to use the expensive spice, saffron, only to not enjoy the recipe. We won't be making this one again.