Carcassonne: Over Hill and Dale 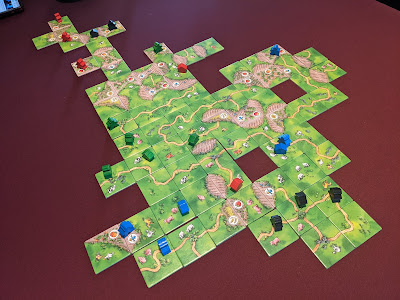 Carcassonne has been one of my favorite games for many years now. It's been continually in my top 10 and I believe the base game plus the first two expansions is the closest thing to a perfect game that you can find. Because I think you can never have enough Carc in your life, I've started to acquire other versions of the game. They follow many of the same rules, but have their own wrinkles from game to game. Recently I was able to trade for two different versions and got one of them to the table right away.
Carcassonne: Over Hill and Dale has a slightly different setting from the original where players are building farms rather than cities. There are still roads in the form of paths, but stables take the place of monasteries. Not having the fields scoring option makes the gameplay less aggressive and explains why players start with less meeples to place throughout the game.  Just like in the original game, players draw and place tiles to the board on their turn. Then the player can play either a meeple or stable on that tile.
One of the major differences comes with the paths, players can move their meeple on a path for a point every time they extend that path. This incentivizes other players to close off paths before they get too long. The player gets to score that path and gets the meeple back, but it keeps them from getting those few extra points that could swing the game. I think this makes the "roads" more interesting than they are in the original game. Farms score in the same way as cities, but like in the Traders and Builders expansion there is a set collection aspect. Some tiles have icons on them and when a farm in completed, the player gets tokens matching those icons. Each token is worth one point on its own, but a set of 5 different tokens is worth an additional five points.
Stables are the other major change in this game and they have a similar scoring mechanism as a monastery where they need to be surrounded by other tiles. Only now instead of a single point for each tile, it's one point for every animal printed on the tile the stable is on and the surrounding tiles. Players do not get the stable back when the tile the stable is on is fully surrounded, instead they stay on the board and score at the end of the game. I scored a ton of points by placing my stables very early and continually placing tiles that had two or three animals on them.
I really enjoyed this version of the game and it was pretty close in end game scoring. I do think the game is a little short for four players because there aren't a lot of tiles. That being said, we normally play with two base game sets and a couple expansions. I think this would be really great at two players, especially if you don't want to worry about the area majority scoring of fields in the original. This is definitely staying in the collection and had encouraged me to collect others in the series.
Review Tabletop