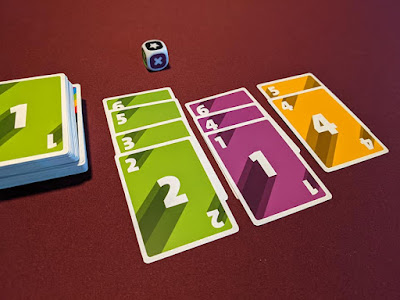 I'm always in the market for games that feature "cards with numbers". I grew up playing a lot of games using a traditional deck of cards and games like UNO and 5 Alive. So games like PUSH tend to remind me of those times. I like a themed game as much as the next person, but I'm also perfectly content playing games that just have simple art and do something interesting. They may not always be the most strategic, but that doesn't mean they can't be fun. I've found that these types of games work really well with casual gamers and not so well with our current group. You may remember that it happened with a similar game, L.L.A.M.A., toward the end of last year.
PUSH is fairly simple and very straightforward push your luck game. On a player's turn they have two options: 1) draw cards from the deck and add them to one of their piles (max of 3) OR 2) bank all of the cards of one color so they're safe. When adding cards to the piles, players can't add a card to a pile that has the new card's color or number. If they are unable to place the card then it gets discarded and that player doesn't get to claim any of the piles. In this case, the other players claim piles until they have all been claimed and add them to their bench. The active player can choose to stop at any time and claim any pile to add to their bench, the remaining piles are claimed by other players.
A big wrinkle in the game are the Roll cards that can be added to the piles. When a player claims a pile with a Roll card, they roll the die and discard all cards from their bench that match the color rolled. If a player rolls the star or a color they don't have, then they don't discard any cards. This throws a big random wrench into players' strategies. It could be seen as too random and too punishing, but it's a casual game that should be taken to seriously. Playing conservatively and banking any high cards gained, instead of drawing, could be a boring but powerful strategy.
I thought the game wasn't bad, it's not my favorite "cards with numbers" game but I'd play it again. The rest of our group disliked it, so it won't see the table unless I play it with the kids or other friends when visiting. Are there any "cards with numbers" games that you really enjoy? I'm going to do a post sometime soon highlighting my favorites.
Review Tabletop