Lanterns Dice: Lights in the Sky 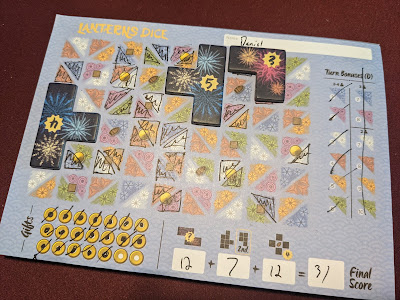 Barnes and Noble had some crazy clearance recently at our local store and one of the games I picked up was Lanterns Dice: Lights in the Sky. This is the dice version of the fairly popular, Lanterns, which was released in 2015. I still own the original and covered it in this post from 2017 where I recapped all of my unplayed games that got played that year. This dice version of the game was released in 2019 by the same publisher (Foxtrot Games/Renegade Games Studio), but was designed by a different designer (Chris Bryan) who designed a game I really enjoy called Favelas.
Lanterns Dice: Lights in the Sky is a roll and write game for 2 to 4 players that takes 30-45 minutes to play. The object of the game is to score the most points through a series of three different scoring methods. Coloring in multiple pools into various shapes allows the active played to cover those spaces with fireworks tiles to score points according to the value on the tile. The earlier the tiles get claimed, the more points their worth. Players also score for their second largest contiguous group of fully colored in pools. Finally, players score 4 points for each boat on their sheet that's been surrounded by fully colored in pools that are orthogonally adjacent. Whoever has the highest combination of points wins.
Coloring in a triangular section of a pool with a pavilion (gold circle) gives a player a gift that can be used to perform one of three Emperor Actions, all of which allow a player to color in more pools. Coloring in both parts of a pool with a platform (brown squares) allows a player to color in one piece of any adjacent pool. These two bonuses allow for some great combo action if played at the right time. Each round there is an additional bonus for the active player that lets them fill in any one triangular space part of a pool that matches the color for that round.
This game does a great job distilling the feeling of the original, which is a tile laying game. You still get a bit of that anxiety/rush as you try to be the first player to claim a higher point tile before everyone else. There's also the ability of assigning what each player gets during your turn as the active player by orientating the tray once the dice are rolled. One player can get really screwed over if the other players keep giving them the same color over and over (I got SO many blue dice). In the end I won our only play of this despite all of the blue dice coming my way. While I did like how you get the feel of Lanterns, Christine and I would rather play the original so this was traded away.
Review Tabletop