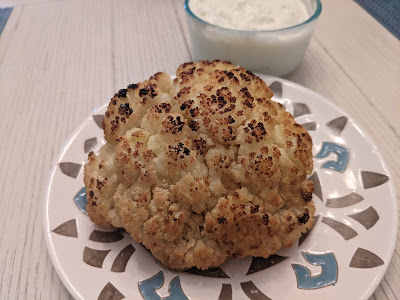 I think this is the last of the many cauliflower based recipes in the cookbook. I never realized just how versatile this vegetable was. This was one of the highlight recipes that really stuck out for me because it felt like it would have a really nice presentation, being served whole like you'd normally serve a chicken or turkey. There are only a few steps in this recipe and I think one of them can be eliminated entirely. The reason I think that is because I don't believe the whipped goat cheese is necessary at all. It tastes good and compliments the cauliflower well, but it makes way more than is really needed. I think the dip/spread would be better to be served with crackers or pita chips. I'll be making that again for sure, just not when I make the whole roasted cauliflower. The whipped goat cheese is also kind of pricey for what it is, so save that money and buy 4 or 5 more heads of cauliflower instead.

To make the cauliflower, wine, olive oil, salt, lemon juice, butter, red pepper flakes, sugar, and a bay leaf get brought to a boil in a large pot. Once the mixture gets to a boil, carefully lower the head of cauliflower into the pot and turn the heat down to a simmer. Turn the head a few times and allow to cook until a knife easily inserts into the center. Carefully remove the cauliflower and place on a rimmed baking sheet or roasting pan. After spending 30 to 40 minutes in a 475 degree over, you're left with a nicely browned head of cauliflower. Drizzle with a little olive oil and some salt before serving.

I loved the way it turned out and definitely will make this again. This is a recipe that can be tinkered with to create some delicious results just By changing the spices and liquids that go into the cooking water. Christine and I ate the entire head of cauliflower with the rest of our dinner. The nice thing is you can do that and not feel terrible about yourself because even a half a cauliflower head isn't many calories. If there's one thing that made this cookbook worth it, it's the cauliflower recipes.