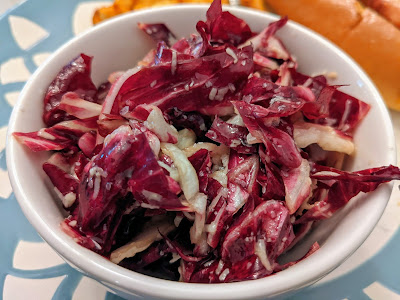 There are a bunch of salads in the cookbook, so I've been peppering them in here and there throughout the year. This is one of the easiest recipes because there are so few ingredients and no cooking involved. You do need an hour for the vinaigrette to come together, but most of that can even be done ahead of time. The biggest problem I had was finding radicchio in my area. It took visits to 4 different grocery stores before I found it. Even when I did, this stuff isn't cheap. Since it was just Christine and I eating it, I only bought one head of radicchio instead of the 2 to 3 as called for in the recipe.
After coring the radicchio and chopping it into 1-inch pieces, place into ice code water for 15 minutes. This removes some of the bitterness. Meanwhile, the vinaigrette can be started by combining balsamic and sherry vinegars. Red onion gets chopped and then added to the vinegar mixture to infuse it with the flavor instead of adding the strong kick of raw red onion to the salad. After an hour, the onion gets strained out before honey and olive oil gets whisked in. The radicchio gets tossed with the vinaigrette and then with Manchego cheese. More of the cheese should be grated over the top of each portion before serving.
We both thought this salad was fine. It served as a nice vegetable side but I prefer my salad to be full of stuff and thought it was just too simple. I think a mix of radicchio and some other greens would have offered more flavors and textures. The dressing with the cheese was good and it was the first time I've had Manchego before. If I take anything from this recipe, it's going to be consuming more Manchego.
books cookbook Food Resolution