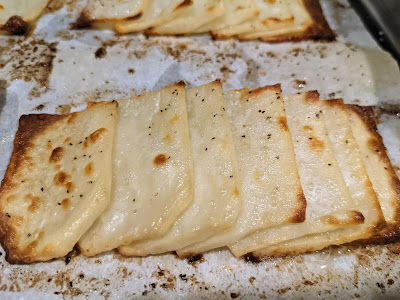 This is one of the simplest recipes in the cookbook by far. All you need are four russet potatoes, a stick of butter, and some salt. The most effort it turning the butter into clarified butter, which is just melting it and removing the fat solids before letting it harden in the fridge. While the butter becomes solid again, simply cut the ends and sides off of the potatoes until they form even bricks. Using a mandolin or knife, slice the potatoes to 1/8 inch thickness. What you're left with are rectangular slices that you then fan over one another like a stack of fallen dominoes. After adding a tablespoon of the clarified butter and a sprinkle of salt to each stack, the parchment lined pan goes into a 400 degree oven for about 40 minutes. When the edges start to brown, you know they're done.

The recipe is another technique more than a recipe, but it's another way to prepare potatoes which is always a good thing. While these aren't my favorite preparation, I did like a lot things about it. Having different textures from each slice was very enjoyable for me. I like each bite to be a little different and you get a lot of that as you eat your way through the stack. The interior slices get really creamy, almost like Yukon Gold potatoes get when roasted. I think they could have used some more seasoning, but a simply roasted potato can be a great compliment to a really flavorful dish. I'll definitely make these again, but maybe toss them with a spice mix, garlic, or something to give them a little extra kick.

I was a little annoyed when preparing the potatoes because it seems like a lot of waste as you shape them, but the book has a solution. Put the scraps in a bowl of water and put that in the fridge if you don't plan to use them right away. Later on you can boil them for potato salad, soup, or mash. Another idea would be to dry them off, drizzle with oil, and roast. If you have an air fryer, this is the perfect opportunity to use it. In fact, I'm just now realizing I could also try to make the dominoes in there as well in less time.