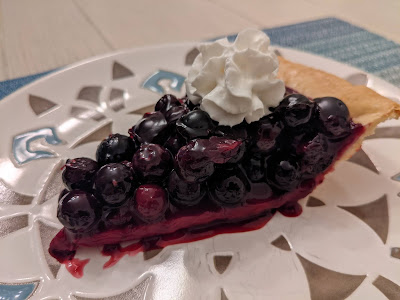 Having pie recipes in the cookbook allows me to meet two resolutions every time I make one. This pie is the 9th of the year, which draws me incredibly close to my goal of 12 for the year. It is probably one of the easiest pies I've ever made. Normally you bake filling in the crust, but the naturally high levels of pectin in blueberries combined with cornstarch allow it to thicken without needing time in the oven. The crust gets baked until completely cooked and then you allow it to cool before pouring in the filling. After a couple hours you can cut picturesque slices that hold together incredibly well.

The recipe for the pie crust has a crap ton of steps and I just wasn't feeling doing all of them. In the notes it said you can use whatever crust recipe you want, so I decided to use the listed ingredients and just make it the way I normally make crusts. The only substitution I made was using vodka instead of cider vinegar. Both of them will curb gluten development and make the dough easier to work with. I would have used the cider vinegar but I was out and happen to have a bottle of vodka in the fridge. The crust turned out incredibly well and might be the best basic flaky pie crust I have ever made.

While we really enjoyed the crust and the ease of the recipe, it was ultimately just okay overall. It has nothing to do with the recipe itself and is entirely the fault of the blueberries I bought. They were fresh from Aldi, but they just didn't taste great. I wanted them to be tart and these were a little on the sweet side. If I were to make the filling again, I'd opt for local blueberries that I could taste before buying. That crust recipe will be my new go to when I need a standard crust though.