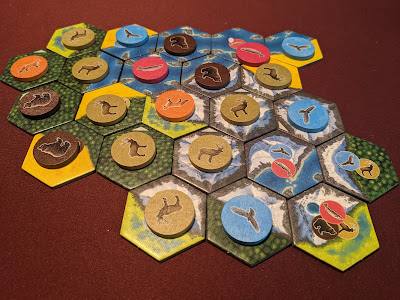 Flatout Games, the publisher and game design lab, have been absolutely on fire over the past few years. Cascadia is the second game that's been published by them, after the amazing Calico in 2020. The CoLab (made up of members Molly Johnson, Robert Melvin, and Shawn Stankewich) have had five other games published by various publishers, including one of my favorite card games in Point Salad. As a publisher they have done a wonderful job with their first two games. The gameplay and components of both Calico and Cascadia are just so satisfying. Teaming up with Beth Sobel as the artist for both allows for beautiful looking games.
Cascadia is a tile laying puzzle game from Randy Flynn, that involves drafting tiles and adding them to your personal board. When drafting a tile, players also draft the animal token that is paired with it. When the tile is added to the player's board, the tile has to go on an unoccupied tile with the matching animal on it. The object of the game is to score the most amount of points, which is done by 1) building large habitat areas by placing matching sections of the five different habitat types, 2) placing the wildlife tokens in their specific scoring patterns, and 3) collecting nature tokens. Each player only gets 20 turns, which makes every decision so important.
The nature tokens give players some really meaningful decisions. To get them, player's need to draft a tile with a singular wildlife icon on them and then place the matching animal token on it. These singular wildlife tiles reduce a player's flexibility because most tiles have two or three different animals on them. But the nature tokens are so crucial to doing well in this game. They're worth a single point on their own, but they also allow a player to do two different actions that can really help. The first option is to wipe any number of wildlife tokens and replace them. This is perfect for when you need one more of a specific animal but there aren't any on the board. The other option lets a player take any tile and any wildlife token. Being able to get two pieces that aren't matched is almost always worth the point a player is giving up by spending the nature token.
I absolutely love Cascadia. Our one play so far was super close, with all players being with 6 points at the end of the game. There is an option to play the solo version of the game online on by clicking here. I played it a couple of dozen times while the Kickstarter campaign was going on and I enjoyed it so much that I already knew it was a keeper before I got my copy in the mail. The multiplayer version of the game is just as good and even has a small area majority bonus for having the largest of each habitat. Since tile laying and drafting are two of my favorite mechanics, Cascadia was destined to be a winner.
Review Tabletop