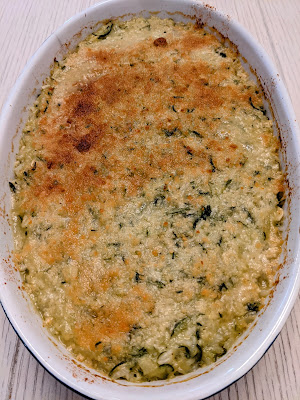 After our recent weeklong trip back to Syracuse, I returned to find a couple rather large zucchini in the garden. Once they reach a certain size, they tend to get rather bitter so my usual preparation of grilling them wasn't going to work. I remembered I needed two pounds of zucchini for this recipe and had all of the ingredients needed to make it, even though I hadn't been to the store yet. Normally a gratin is full of cream, butter, and a lot of cheese. This one opts to go a healthier route with a little oil, milk, and less than a cup of parmesan cheese.

There are two really interesting techniques in this recipe, the first being the multiple uses of the zucchini. The zucchini gets shredded using a box greater over a colander that's sitting in a bowl. As the zucchini shreds, it starts to shed its water weight and drip through the colander into the bowl below. You add salt to the shredded zucchini to hasten the process before squeezing handfuls of it to get as much moisture out as possible. I found this very tactile part of the recipe to be very satisfying. All of that zucchini juice gets saved topped off with milk to form the base of a light béchamel sauce.

The second technique is adding 1/2 cup of parboiled rice. The rice will soak up the the remaining juices, which in turn thickens the sauce and adds another texture to the dish. The starch released from a small amount of rice makes sauces and soups creamier without obscuring the flavors you're going for. It's also a great way to avoid having to add more dairy or fat to achieve the same texture. Using a small amount of parmesan cheese adds flavor, salt, and texture in a couple of ways. Some cheese it mixed into the zucchini, rice, and onion mixture and a few tablespoons get browned on top of the casserole.

This was a real winner in my opinion. It makes A LOT but the ingredients were inexpensive and things I had already, so it's not a huge deal if we're unable to finish it all. I don't think it's going to freeze particularly well, but I may try to freeze a portion or two just to see. I would have loved it even more if it had a bunch more cheese mixed in, but that's not really the point of the recipe. Making a gratin with zucchini will be a go to as the garden produces more than we want to eat simply seasoned and grilled.