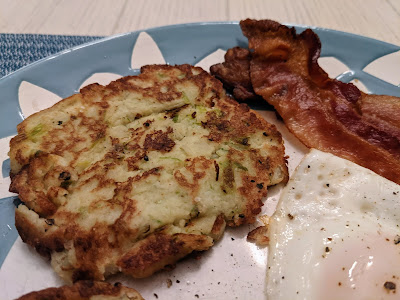 Potatoes are far and away the favorite food around our house. They can be used in so many different ways and they almost always come out tasting great. The nice thing about making these potato scallion cakes is that you need cold mashed potatoes, so I just made a boatload for a different meal and then saved some for leftovers. Christine loves her mom's mashed potatoes, but has said mine are getting incredibly close. My life's goal is now to hear her say that they're better (I'm competitive, okay?!). My mom has a potato pancake recipe that it very similar to this one, so I have some experience making these. They're incredibly easy to make and are a great addition for any meal. I like that they're a way to switch things up a bit instead of the standard roasted or mashed versions.

This recipe uses a LOT of scallions, as it should if it's in the name, so many that I almost thought about cutting back on them. I love scallions and all of the other alliums, but Christine isn't as much a fan. The most important step is boiling them after washing and trimming. This keeps the fresh green flavor without the bite you get with raw onion varieties. Once those are boiled until tender, they get finely chopped before being mixed with the potatoes, eggs, nutmeg, salt, pepper, and bread crumbs. Fresh bread crumbs take the place of flour, which is found in most potato pancake recipes, because they're more forgiving and don't get gummy when introduced to liquid.

The boiling the the scallions and the substitution of bread crumbs make for a lighter than average potato cake. I decided to serve them alongside a sunny side up egg and some applewood smoked bacon. I did make one mistake in that I made them too big to easily flip. The recipes calls for two rounded tablespoons and I think mine were closer to three, as I was just eyeballing it. Making a bunch of smaller cakes would be easier to handle and would make for a great looking platter when serving a large group. I will definitely be making these again with some changes like adding some garlic and/or cheese of some type.