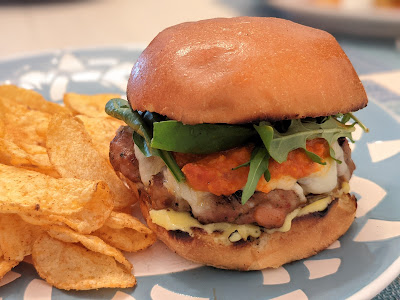 Now that summer is almost here, I'm going to start knocking out all of the recipes that require the use of a grill. First up is this recipe for grilled pork burgers. If you know me personally, you know that burgers aren't really my thing. I do eat quite a few of them throughout the year, but they're more of a convenient thing to make that two of our kids will also eat. I'll often make them on late nights when I just need to make something quickly. However, this burger takes quite a bit of time because there are actually three recipes included. There's the burger patty itself, a homemade garlic aioli, and a romesco sauce. I made the spread and sauce first and put them in the fridge while I worked on putting the burger patties together. After the patties were cooked, I warmed the romesco sauce a bit before assembling the burgers.

The aioli is a pretty standard recipe where you're emulsifying egg yolk and oil, adding some garlic and seasoning, and then finishing it off with a little lemon juice. The romseco is a but involved and required some ingredients I don't normally have at home including hazelnuts and dried ancho chiles. I've made a romesco sauce before and while it used similar ingredients, it was more of a dump some jarred stuff in a blender and blend until smooth type of recipe. This recipe requires steaming of chiles, toasting of nuts, frying of bread, and then eventually the blending of everything. The burger patties are a mixture of ground pork, chorizo, and applewood-smoked bacon that's been finally minced. To that there is a mixture of shallots, garlic, and some seasonings that all get cooked before being mixed into the meats.

I couldn't find manchego cheese at either of my normal grocery stores so I subbed in mozzarella as suggested as it's a similar melty white cheese. The whole thing goes on brioche buns and gets topped with a little arugula. My kitchen was a bit of a disaster when it was all said and done. I don't think they were worth the amount of effort and ingredients required, but I was surprised at just how much I enjoyed it. Christine wasn't as big a fan as I was. She loves beef burgers and isn't a pork fan, so that wasn't surprising. I really liked all of the different flavors and textures. The romesco, pork patty, and brioche bun was a great combination. I could have done without the aioli, it did add some extra moisture and fat but mayo would have done the same thing.

As I said, I don't think it was worth the time and cost of ingredients even though I did enjoy them. It was however, nice spending that time in the house pretty much all by myself while everyone else was out in the oppressive heat. The one thing this recipe does inspire me to do is make more complex burgers going forward. I like a basic burger with just beef, cheese, and some condiments, but I also enjoy lots of toppings and sauces as well. We'll see what the rest of the summer brings in that department.