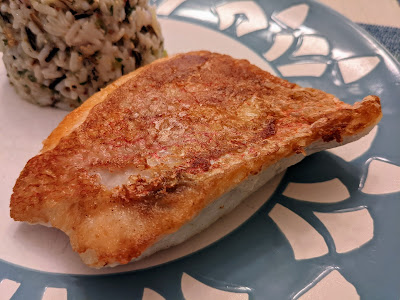 In another attempt to combine a couple of recipes to make a single meal, I chose to make a rice salad and pair it with fish. I love rice and can't recall ever eating a cold version of it with a dressing, so I was very interested to see if this could be a new summer salad that's sans mayo. In place of a mayo forward dressing it a mixture of oils, vinegar, Dijon mustard, salt and pepper. I thought the dressing tasted pretty darn good on it's own and might make a nice marinade for chicken. The salad is a 1:1 combination of wild and white rice that get cooked separately due to their cooking times being different. Some fresh parsley, celery, and red onion round it out. Everything gets tossed together and dressed before going into the fridge too become cold.

I've always wanted to start cooking more fish for dinners, so I was excited to try out this more of a technique than a recipe way of cooking whatever fish looked good at the store. Christine tends to like more mild, white fishes so I picked up some snapper. A lot of the fresh fish at the store didn't have skin so I had to opt for frozen filets but they thawed pretty quickly. The secret to this recipe comes from the world renowned restaurant, Le Bernadin, in the form of using Wondra Flour to dust the outside of the fish with. It's a precooked flour that's been dried and is normally used to thicken gravies and sauces. Using it here instead of regular all purpose flour yields better crispiness and browning. A quick fry in the pan followed by a few minutes in the oven and it's good to go. 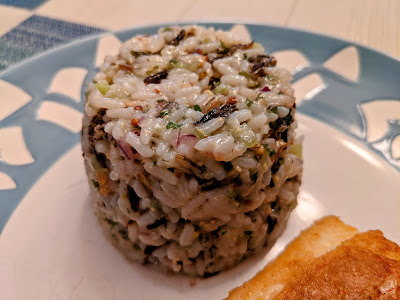 The rice salad ended up being a huge let down. The temperature of the rice was rather off putting and the tasty dressing just gave the rice an odd slickness that neither of us liked. Because two cups of uncooked rice makes so much once cooked, I ended up throwing a TON of rice away. That was very upsetting, but wasn't upsetting was how great the fish came out. I don't know if I've ever even had snapper before, but it turned out beautifully. The skin was super crispy and gave a really nice contrasting texture to the flakey white meat. Christine mentioned it would have been perfect to have a sauce or puree to go with it and I wholeheartedly agree. It's something I will incorporate the next time I made it. With how successful that cooking method is, I want to start making fish at least a couple times a month, if not more often.