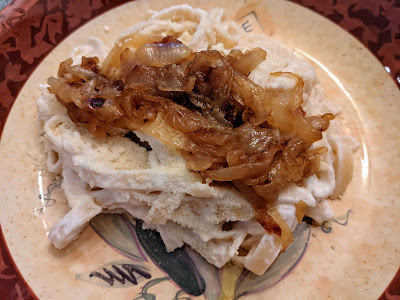 Like most of the recipes in the cookbook, this is rather simple recipe that comes together fairly quickly. Caramelizing the onions takes a bit, but that could be sped up by using the addition of sugar hack. The sauce is just a combination of starchy pasta water and Greek yogurt until you reach your desired consistency. If you don't like Greek yogurt and/or caramelized onions, I would steer clear of this one. I like Greek yogurt and use it semi often in a variety of dishes. However, every time I have caramelized onions, I'm reminded that I just don't find them that good. They're typically too sweet for me, even when I don't add sugar to encourage browning.

Throughout this cookbook, it seems that they often take classic dishes and try to turn them on their heads in some way. Often it's just replacing a ingredient or a technique, sometimes it works and sometimes it doesn't. This Pasta with Yogurt and Caramelized Onions kind of does this by making a yogurt based sauce instead of a cream based one. Both of them are dairy based but end up giving you very different feels and flavors. I imagined this dish was supposed to be a healthier version of something like alfredo, but in the end it just didn't do much for us. I mean we ate it, but there were a few points where I almost pushed it away and got a bowl of cereal. The sauce was boring and as I stated, I just don't find caramelized onions to be that good normally.