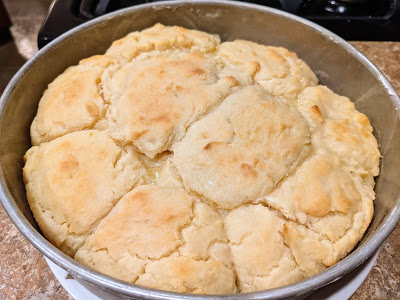 Biscuits are one of my favorite foods, this implementation of them certainly is not. Let me explain. I didn't grow up eating biscuits that often, but always enjoyed them at a place like Cracker Barrel. My love of them grew exponentially after Christine and I got together. She's an absolute southern girl at heart, especially when it comes to food. She adores biscuits and since I adore her, I'm always happy to make them. So I was really excited to see a different way of making something that we both really enjoy. I was quite dubious as first because the foreword of the recipes implies that these biscuits are the solution for dry, dense biscuits due to the wet batter made here. My biscuits are never dry and dense, but that's not really here nor there.
This recipe is a strange one from start to finish. It has all of the familiar ingredients: self rising flour, salt, shortening (I use cold butter in mine normally), buttermilk, and butter for brushing on at the end. What's drastically different are the proportions and addition of more liquid in the form of heavy cream. What you end up with is a cottage cheese-esque batter that in no way would be able to hold its form if scooped into a pan. That's where a cup of all-purpose flour comes into play. You drop large scoops of the batter into the bowl of flour, lightly toss it, and shake off any excess. There is just enough flour on the exterior to keep each mass together. You butt up each one in a buttered cake pan until the pan is full. The idea is that now the dough only has one place to go once it goes in the oven, up.
They did rise some and they smelled like biscuits tend to smell. I brushed them with the aforementioned butter and served them for breakfast. Christine was excited that we were having biscuits for breakfast, that was until I took one bite and spit it out onto my plate. If you know me, I will almost always finish a bite of something even if I don't like it. However, these were NOT good. The exterior flour gave off a really bitter flavor, the interior was quite dense, and they were way too moist. It's not like they were undercooked either. They just tasted really bad. The only part I kind of enjoyed was the very edge piece of the biscuit, where it had made contact with the pan. That part was at least browned and had some texture.
Needless to say, we won't be making these again. There are literally hundreds, if not thousands, of biscuit recipes that follow nearly the same ingredients and proportions for a reason. I'll be sticking with my favorite recipe going forward. This was the worst recipe from the cookbook thus far. Thankfully, as you'll see in some posts in the near future, there have been some real bright spots.
books cookbook Food Resolution