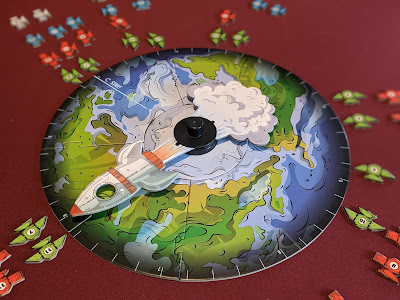 I backed a three pack of small box games on Kickstarter that looked like they'd be right up my alley. I thought about reviewing each one in the same post, but figured it'd end up being too long. So this will be first of three reviews that will go up over the next few days. GPS is a racing game that utilizes a spinner, something normally found in kids and mass produced family games. The objective is to get your numbered satellites in sequential order from the starting point around the board. It's a re-implementation of the game Finito! that uses a twenty sided die instead of the spinner.
Players begin the game with 3 of their 12 satellite tiles face up and then the spinner gets spun. Players choose one of their face up satellites to go in that spot and then flip over another tile at random. This spinning and placing happens 12 times, so that all of the players' satellites are around the board. Then players spin the ship and move any of their tiles to that new space. If one of their tiles is already there, they can move it one space before or after, if available, otherwise to the next space that's open on their side. The games ends as soon as one or more players gets their satellites in sequential order.
That's the whole game and there's not a lot to it. I enjoy mindlessly playing Finito! online, so I was hoping this would be similar. It presses the same buttons, but I'm not a huge fan of the spinner unfortunately. Unlike a die that will come up with a single number that you might be rooting for, the spinner takes the random and jacks it up to 11. Plus the board, spinner often moves or sticks from time to time. I think the production value is very impressive. Getting a whole board in a tiny box gives it some great table presence, but the implementation is lacking from a design stand point. I was hesitant backing this one in the first place, but did it because I got it for like $4 with the bundle discount. Sadly, it'll be moving on at some point.
Review Tabletop