Lost Cities: The Board Game 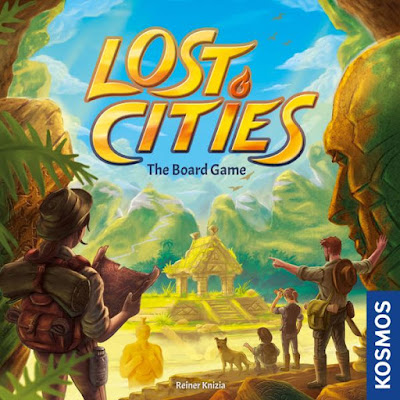 Instead of my normal end of the year Unplayed Games Recap post, this year I've decided to do mini reviews of games I've played for the first time after adding them to my collection. This past weekend we played three previously unplayed games and Lost Cities: The Board Game was one of them. I got this game for Christmas almost as gag gift. My sister-in-law and I like to try and make the other lose "the game" and she knew seeing the words "lost, the, and game" would surely trigger my brain into losing. If you've never heard about this, I'm very sorry but now you're playing and will be until you die.

Now that you're cursing my name for making you lose, let's get back to the review. Lost Cities: The Board Game came out 9 years after the original Lost Cities game came out. The Board Game version plays two to four players in about 30 minutes for the one round short version and about 60 minutes for the three round long version. It uses a the same card mechanic of putting cards of the same color in ascending order as the original. The theme of going on explorations is more apparent in this version though. As you play cards, you move your explorer pieces down paths on the board while possibly collecting artifacts and other treasures. 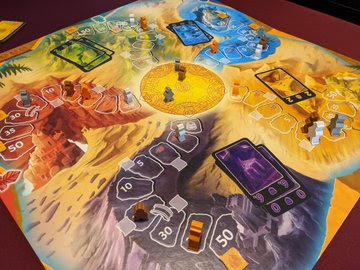 On your turn you play a card and then draw a card, pretty simple. To play a card, you either start a new color pile that you haven't played yet, add a card to one of your existing piles, or discard a card to the board. When drawing a card, you either take the top card from the draw pile or take any one card from one of the five discard piles on the board. When you play a card in front of you, you get to move one of your five explorer pieces down of the five paths to collect points in various ways. Explorers score the points shown on the space where they are at the end of the round (or game if playing the one round short version). The early spaces in each path are negative, so players have to balance how many paths to go down depending on their starting hand and then adjust with what cards they are able to get. When 5 explorers pass over the bridge spaces on the board, the round/game ends. Players score their explorer spaces, artifacts collected, and victory point tiles to determine who has the most and that player is declared the winner.

All in all it's a light, non confrontational game that would be perfect for families. However, I vastly prefer the original two player only game. It's strictly card based and has a fantastic, yet often frustrating, push your luck element to it that The Board Game version does not. I had the original, but we rarely play two player only games so I traded it. Whenever I feel like playing, it's available to play on Board Game Arena anytime. Unfortunately, this game will also be headed out the door at some point because nobody else really liked it that much either. It was worth a play and a laugh, but that's about it.