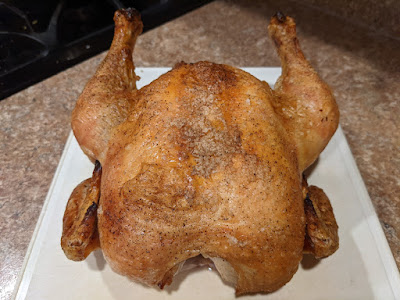 I've made whole roasted chickens before and they always come out pretty good. I attempted one in our air fryer recently, but the bird was we just a little too big so I had to move it to the oven because skin kept touching the heating element. That caused quite a bit of smoke, but not nearly as much as this recipe did. Once again this is less a recipe and more a cooking technique. Most recipes call for roasting at 450 or even lower for a short period before raising the temperature up to that to crisp the skin. This recipe tells you to crank it up to 500 and keeping it there the whole time.
This seemed liked a disastrous decision because fat smokes very easily at high temperatures and boy did it ever. To be fair, the book does offer a tip of DISABLING YOUR SMOKE ALARMS. Either that or lay a bed of potatoes down to catch the fat. I've done the latter with roasts before and it's delicious. But I am trying to make everything as written so I spent a good amount of time running the vent fan, opening windows, and fanning the smoke alarm in the hall.
Despite the crazy smoke debacle, I was left with a very moist chicken with a beautifully browned and crispy skin. It took a little over an hour for this five and a half pound bird to cook. I would have spatchcocked it, but again trying to make stuff as written. Speaking of, I don't think I've ever made a whole bird of any kind without putting some sort of fat on or under the skin. That would have just made the smoke issue even worse I'm sure.
Drying the chicken skin very well, before hitting it with salt and pepper, and the high temperature accomplished the same goal as rubbing oil or butter on it. I did add the optional butter and garlic to the cavity to add some flavor and moisture. All of the juices left in the pan got turned into a quick gravy that was very tasty. I served this with some air fryer roasted potatoes and green beans.
If I were to make this recipe again, I'd definitely put the chicken over a bed of potatoes. I hate having to deal with smoke while I'm cooking. I'd also spatchcock it so it cooked significantly faster, while also crisping up even more of the skin. If you like a whole chicken and love crispy skin, but don't want to do much prep work then this is the recipe for you.
books cookbook Food Resolution