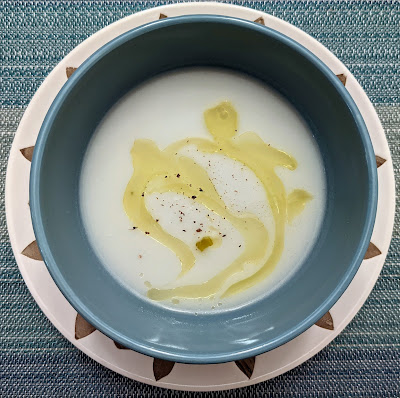 Since it's winter, I figured it's the perfect time to make the soups from the cookbook. Decided on what seemed to be a recipe that could not possibly come out very good. It's incredibly basic, has very few ingredients, and there didn't look like there was anything that would have much flavor. I really like cauliflower, but what makes it a great vegetable is it's ability to take on flavor and it's crunchy texture. Taking that texture away leaves you with...well the taste of cauliflower.
The recipes is just olive oil, onion, cauliflower, salt, lots of water, and some freshly ground pepper at the end. See what I mean? Most soups start with stock or cream or something with fat and/or developed flavor. The foreword before the recipe goes into detail about how you will feel the urge to add cream or bacon or something, but to resist that urge. I was quite dubious. It comes together relatively quickly for a soup from scratch, a little over one hour in total.
So what does the recipe yield? A light soup that tastes like cauliflower. It's fine as is and is probably a great part of a large meal, but I'm so used to really flavorful soups that this just didn't do it for me as is. After a few bites I couldn't resist the urge and decided to add some grated romano cheese and a large handful of mini saltine crackers. Once that was stirred together, it was actually quite nice. It was still light, but now it had some texture and more depth of flavor.
If you really like cauliflower, this soup could be for you as written. I think it makes a good base but needs more to make it a meal. Perhaps that's where I went wrong, trying to make it something it wasn't. However, it still doesn't excuse the "fine" outcome in the way it tasted. If I were to make this again, then I'm going the YOLO route. I'm adding the cream or bacon or butter or some sort of fat outside of the olive oil to make it a soup that I actually want to eat.
books cookbook Food Resolution