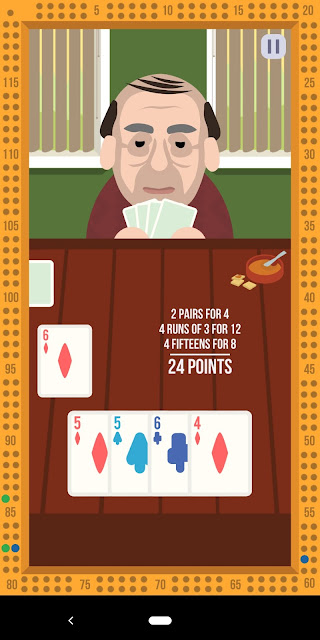 Cribbage with Grandpas is a Cribbage app you can play on mobile devices. There are plenty of free cribbage apps out there, but I like this implementation a lot more. It's available on both Android and Apple for just a few dollars and gives you the ability to make custom Grandpa avatars to play against. Besides just the way your grandfather looks, you can also choose personality traits, the setting in which you play, and the snack that he has sitting near him. He'll tell jokes and make comments throughout the game, which makes it just that much more immersive.  Is it necessary to pay to have these things? Absolutely not. Does it add a lot to the experience? Absolutely.

As with other Cribbage apps, there are different difficulty levels so even if you've never played before you can get better and still have a challenge. One thing I really like is that you have to score your cards yourself by selecting them. If you happen to miss something, Grandpa will let you know that there are still points to be had. One thing I think that I think is missing from the app are stats that show you how efficient your play has been. The only tracking in the game is the overall games you and your grandfather have won against one another. It's not super important to have more in depth stats, but apps that have them do help you improve as a player. This app isn't about that though.

I didn't grow up playing Cribbage, but I've always loved traditional card games so I started playing on a free app years ago. When I saw some of my Twitter friends posting images from this app, I initially wrote it off because I don't like paying for apps normally. One day it went on sale for a dollar or something and I decided why not. I'm very thankful that I did because while I like playing Cribbage, being able to create an avatar of my grandfather to play against helps keep him with me.

I was very close to my dad's father, James Isom, when I was young. I don't have a lot of regrets in life, but my biggest one was not going to see him at the end. As a young teen, I decided I didn't want to see him like that and wanted to remember him as I knew him. Looking back, I should have gone and I've beaten myself up about it over the years. Now when I'm feeling sad about something, I open the app and play a few games as if he is still here. I always select the laugh option at his bad jokes and smile when he dozes off if I'm not quick enough to play my cards.

Cribbage with Grandpas has given me a piece of something that I would pay any amount of money to have back, time with my grandpa. I know it's not real, but it feels real enough sometimes. So if you like Cribbage and have a grandfather that you miss because they're gone or just far away, it's worth shelling out a couple of bucks for this great app.