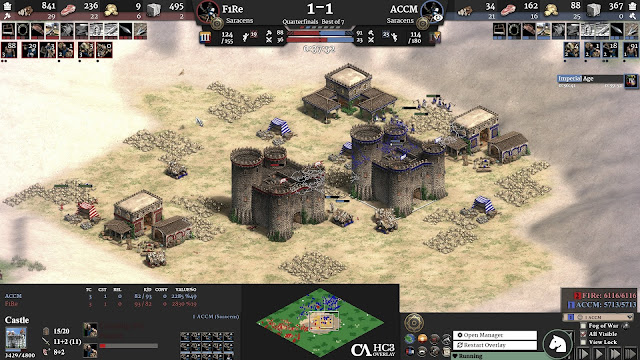 A couple months ago, I started watching various video games being streamed on Twitch. My favorite channel by far has been T90Official, who casts various Age of Empires II: Definitive Edition games. T90Official a.k.a Tristan also shares the best of his content to his Youtube channel. I never thought I'd be a person who watches e-sports regularly, but I guess it's no different than me watching friends playing one player video games when I was younger. There are a lot of tournaments and high level games, so there are hours and hours of games to watch each week.

I actually found out that Age of Empires II got a new edition released from another Twitch channel that I watch. I had such fond memories of playing the original over 20 years ago that I needed to know more about the new one. In 2019, the game got updated graphics, campaigns, and civilizations. I downloaded and played a few games on our crappy laptop, but I really want to get a new computer so I can play more often.

Now that the new edition is out, there is a vibrant gaming scene online. There are even people who play the game professionally. T90Official covers all of the best players and does a great job explaining the game, very much like any other sports commentator. Some of my favorite content of his is his "Low Elo Legends" series where he casts live games of players with lower rankings. I've learned a ton by watching those casts and videos while also getting a lot of laughs. If you have fond memories of Age of Empires II or just love high level strategy games, please consider checking out T90Official's content.

Here is the most recent highlight video from a Low Elo Legend cast: