Christine saw an advertisement for a drive-thru dinosaur exhibit up in Philadelphia that she knew the kids would love. We thought about bringing them, but by the time I went to get tickets, they were sold out during the times we realistically could go. Lucky for us, they extended the dates and moved the exhibit to a bigger venue, so we were able to go last Friday. We kept the whole thing a secret so we could surprise them when we got there. We looked at it as a reward for getting through a very brutal first two weeks of school...that's a post for a different day.

We decided that we'd stop at McDonald's to get dinner to eat on the way up to keep them somewhat distracted for part of the drive. When I went to order the Happy Meals, I noticed the toy was from the new Jurassic World series so they all got a dinosaur themed toy. We couldn't believe how perfectly that played into the night we had planned. Grace read the signs as we pulled into the parking lot and got super excited when she realized what we were about to do. Ben got excited too. James was a little frightened at first but warmed up once we got going. 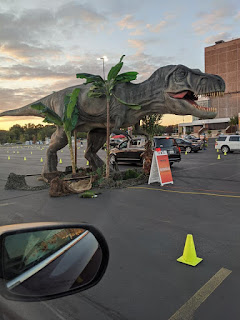 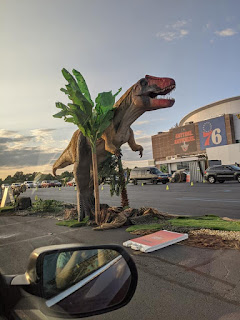 The whole thing consists of lines of different dinosaurs starting off in the early periods and then moving through the later periods. There were over 80 true to life sized dinosaur statues that were incredibly detailed and many of them moved. What really made the experience great was the accompanying audio track that you listen to through the car speakers. It gave a ton of information about each time period and the dinosaurs while also adding some humor for the adults. Christine and I even learned some dino related trivia that we'd had never heard before.

As we were leaving, we gave each of them a dinosaur themed gift that we had prepaid for and received when we scanned our tickets. The package we picked was only $15 for 3 things, which was perfect. James got a toy dinosaur, Ben got a balancing dinosaur, and Grace got a little fossil set that you carve away until you find a real fossil. All in all, we though Jurassic Quest was a great experience because the kids had a ton of fun. To be honest, Christine and I really enjoyed ourselves too. The exhibit is currently in Philadelphia and Boston through the end of this week, but will be moving on to other cities after that. I would suggest checking it out if it's within a hour or so drive from wherever you live.