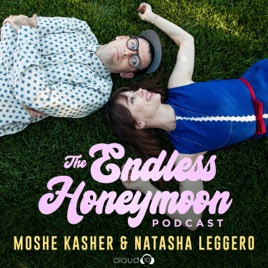 Right about the time everything started to shut down and the world started to quarantine, I stumbled upon The Endless Honeymoon Podcast. It's hosted by Moshe Kasher and Natasha Leggero, a husband and wife who are both stand up comedians and they're both hilarious. They recently celebrated the one year anniversary of the podcast, so I thought I'd spread the word because it's one of my absolute favorites. Building off of their Netflix special, The Honeymoon Standup Special, Moshe and Natasha offer love and relationship advice to callers while also roasting them a bit. As funny as the answers to callers questions can be, the advice is always helpful and relatable to anyone who has ever been in a relationship.
Sometimes they bring guests on the show to help give advice and they're almost always comedians that you've probably heard of like Patton Oswalt, Judd Apatow, and Seth Rogen. Adding one or two extra comedians to the calls often creates hysterical chaos. The other part of the show, which has now have become whole extra episodes, is the secret hotline where people can anonymously leave secrets. I've always been a big fan of PostSecret and similar sites/social media accounts, so hearing the secrets and then their responses to them is sometimes pure gold.
Aside from The Endless Honeymoon Podcast, the couple have done solo album and TV specials and done a fair bit of acting. Natasha currently is stars in the sitcom Broke on CBS. Moshe also wrote a book that I want to read entitled Kasher in the Rye: The True Tale of a White Boy from Oakland Who Became a Drug Addict, Criminal, Mental Patient, and Then Turned 16.
A word of warning, the language used on the podcast can be very vulgar and is often sexual in nature because of the types of calls they field. If this isn't your type of thing, I would strongly advise not listening, but if that doesn't bother you then I think you're in for a real treat.
comedy podcast