You Suck At Cooking 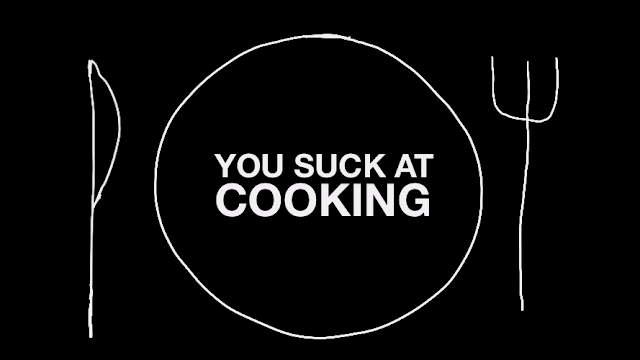 Aside from the baking portion of my monthly accomplishment updates, I haven't done any food related posts in a while. Today, I thought I'd also share another one of my favorite YouTube Channels, You Suck At Cooking. I stumbled upon it a couple years ago when I first started to consume a lot of YouTube content. As I've said in previous posts, I was very late to the game when it came to subscribing to channels. The nice thing about that is I normally have many hours worth of content to watch when I do find a channel I like. Since food is one of my main interests, I started watching a lot of food related channels. The name alone made You Suck At Cooking stick out immediately.
YSAC, as it's sometimes referred to, is a show about cooking (obviously) but it's got humor, original songs, montages of various animals (usually dogs), and reoccurring skits. The videos are normally less than 10 minutes long, so watching all 110 current videos wouldn't take you that long if you want something to binge. If you're even an average cook at best, you're not really going to learn anything but that's not why you're watching it. It's a comedy channel at heart that plays with food. However, there's now a cookbook that contains recipes from the show, so maybe it really is a food channel.
One of my favorite parts of the show are the camera cuts that turn something like a watermelon into limes into peas, just by chucking them against the wall. I also really enjoy the lingo he uses, which is similar to that found in regular cooking shows, but in a hilariously satirical way. I find myself saying some of the phrases like "pepper, pepper, pepper" whenever adding pepper to something I making (this is almost a daily occurrence), when mixing something up with a whisk or spoon "I'll just wangjangle this a little" or when turning on the oven to 350 I'm "putting the undo on three-fundo." I find little things like that very funny and when they bleed into normal life it makes me enjoy the channel even more.
If comedic food videos are something that might interest you, please go check it out on YouTube. If you're too lazy to do that, please see the video below:
For good measure, below is my favorite video. It stars the reoccuring character, Pimblokto, a robot cook of sorts with vulgar vocabulary.
comedy Food Internet youtube