The first month of the year is over! A lot of people said this month took forever to end, but I think it flew by. I'm riding high on the success I had across the three things I wanted to accomplish this month. I'm hoping to carry this energy through into the shortest month of the year (not that short though because it is a leap year).

1) Write at least 2 blog posts each month
I knocked this one out on the very first day of the month with My New Decade's Resolutions and a 2019 Unplayed Games Recap. Aside from doing "resolutions" for this year, I decided the start of a new decade would be a perfect time to set some resolutions for the next decade. Check out that post to see what I want have done by 2030. For the second year in a row, I wrote about all of the unplayed games I got to the table during the year. There were quite a few that left my collection or will be leaving soon, but a bunch that will be staying as well.

I kept it going by introducing Soup Mush™©® - Patent Pending to the world. I had a lot of fun writing this one and hope at least one person enjoys the greatness that is Soup Mush. I'd like to do some sillier posts like this one, where I share little things that bring me pleasure in life.

2) Complete the 10 x 2 Board Game Challenge
Christine and I sat down and picked out the 10 games that we'd be playing for this challenge. When I made my initial list, it had 14 games. Getting that down to 5 was rather difficult. Thankfully, Christine had picked a few of the games on my not so short list, so that helped a bit. Here are the 10 games we'll be trying to play, twice each, before the end of the year:

Our family schedule in January was very busy, but Christine and I did manage to get BOTH plays of Kingdom Builder in before the month ended. 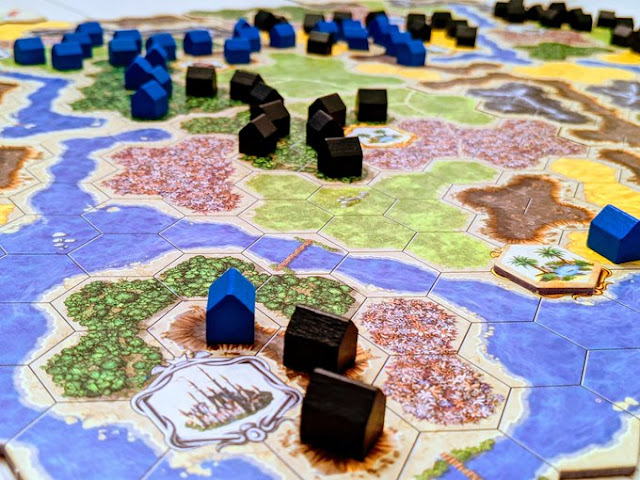 I expect the school breaks and summer time to be our optimal gaming time. I'd like to have zero months with zero plays and maybe squeeze in some games that aren't on our list too.

3) Bake at least 2 different baked goods each month
For January, I decided I wanted to use my sourdough discards to make non-bread items. I'd been craving blueberry muffins, so I found a recipe for those and then stumbled upon a recipe for banana bread. I split the muffin batter in half to make half blueberry and half double chocolate. I could have just made them all blueberry, but the girls like chocolate.

Both of them came out pretty good. The blueberry ones were tender, moist, and a little denser than a traditional muffin. The chocolate ones were a little drier and denser, likely because of the addition of cocoa powder. I tried to thin the batter out some with milk, but I didn't add enough. I'd definitely make them both again with a few adjustments. The banana bread was AMAZING. It wasn't as moist as the recipe I normally use, but there was a better depth of flavor. Also, tossing some of the walnuts with sugar before sprinkling some on top candied them a bit.

I hadn't made bagels in quite some time, so I decided to see how they'd work out with the starter in there. Yes, I know, bagels and bread aren't that much different. They're different enough and Christine likes my bagels so I knew they'd get eaten. We still can't get good ones locally. Following steps from a couple of different recipes, I made a dozen and put them in the fridge to slow proof overnight. In the morning, I boiled them, brushed them with egg white, and then sprinkled some with various toppings before baking. 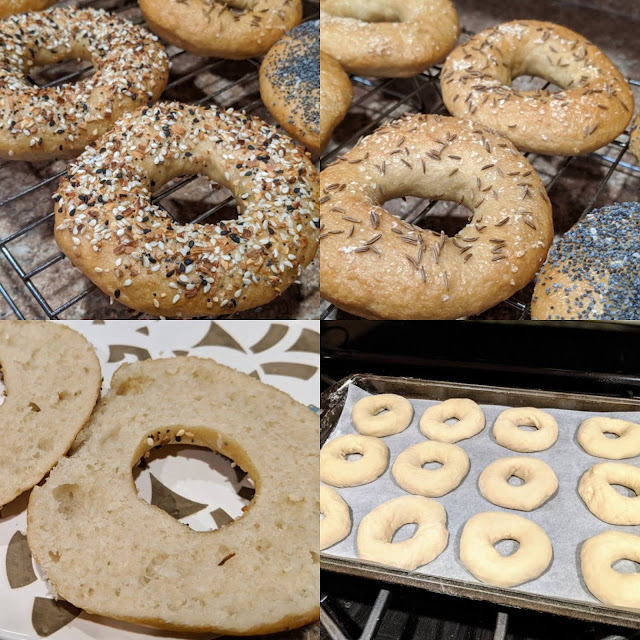 These were, by far, the best bagels I've ever made. They were light and airy on the inside, but still had a nice chew and crispy exterior. The sourdough gave them some tang that I don't think I can exclude going forward. I was a little scared about how dense they were going to be because they didn't rise much after they went into the oven. I think letting them proof longer would have helped with that. That being said, I liked how they weren't the bloated "rolls with holes" that you see at the grocery store.
Baking Bread Food Resolution Tabletop Writing