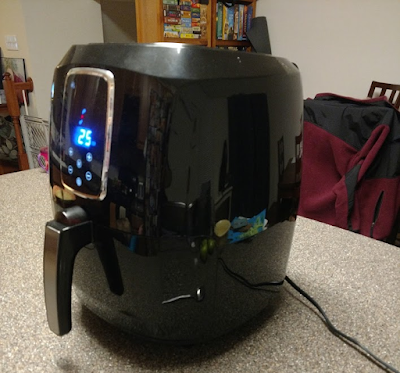 While visiting family over Thanksgiving break, my mother-in-law gave me an airfryer that she had purchased but never got around to using. I was interested in seeing if it was worth owning or if it was just another kitchen gadget that would see a use or two before sitting in the garage for eternity. The sheer size of the one she gave me already had me worried that it would be the former. If I couldn't find a place to keep it off the counter and hidden in my kitchen, then there was little hope for it to stay. I found a spot under my sink that it just barely fit into and I was very happy that it did because I loved this thing.

Within the first couple weeks, I was using the air fryer at least three times a week to do something. At first it was a lot of reheating leftovers like a slice of pizza or french fries. Then I was putting anything frozen that would normally get put in the oven like fish sticks or chicken nuggets. But where it really started to shine was when I'd slice up potatoes into fries or cubes and cook them until they were nice and golden brown. I was using it so often that I decided it needed a full time spot on the counter. Since we don't use our four-slot toaster but maybe once a week, I just swapped their places.

My favorite thing about the airfryer is that it cooked food more evenly and in a much quicker time. Because of its size, it heated up significantly faster than a standard oven. The air part of the fryer basically makes an airfryer a mini convection oven. The fan blows air past the heating element, which then circles around the food for a even distribution of heat and fat to crisp the food up. 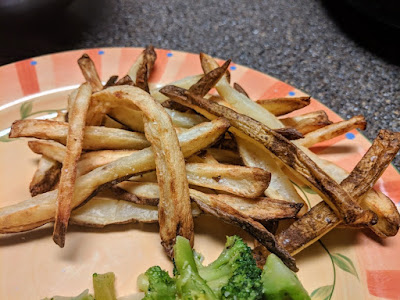 My absolute favorite thing to make in the air fryer was grilled cheese sandwiches. The bread crisps to the perfect golden brown and even dries out a bit, much like a baked grilled cheese. See my post about that and why it's still right but know that the airfyer basically mirrors them in a shorted amount of time. I also made a bunch of other things that turned out really great including: baked potatoes, chicken wings, and biscuit donuts.

Having pointed that it's more of a mini convection over, an airfyer isn't really frying your food. At least, not in the traditional sense. You won't notice that much of a difference when it comes to breaded foods. However, as good as the french fries that you can make in an airfryer, they still aren't as good as the standard deep fried fries. But the airfryer version is healthier so there's that. It also did not produce fried dough at all really. It never got the rise or browning that it's supposed to, leaving me with flat, pale, and chewy dough (see below). 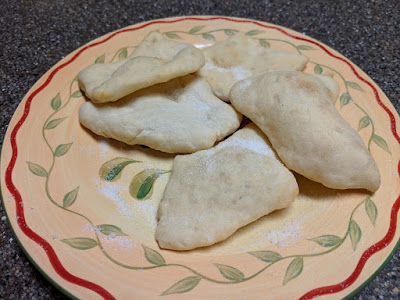 When using the airfryer to make healthier versions of fried foods or to reheat leftovers, it's a really great piece of kitchen equipment. Which is why I will buying a new one once we settle into our new house. You may have noticed that when I've been referring to my airfryer in the past tense. That's because mine broke about a month ago. I was very sad when it happened because it went from reheating some fries for Grace to it just blow cold air over the buttered bread of our grilled cheese sandwiches. The heating coil had cracked and bubbled open causing it to no longer heat up. I tried to get a replacement part to no avail.

The silver lining in my free airfryer breaking is that I know I really want one because I'll use it. It also showed me that I don't want one that has the closed basket where you can't see how everything inside is doing. You have to do that anyway to toss or flip the contents to get even cooking, but with the now broken airfryer...RIP...I had to open it semi often to check, which turns it off and cools it down. Just like if you were to keep opening your oven's door. They make glass faced ones now and I believe that's what we're going to go with next time.
Food Health Pizza Sandwich