Blokus - "Roll and Write"
The game design bug bit me last month. I hadn't had any desire to design a game in quite a while, until I had an idea for a "roll and write" version of one of my favorite games, Blokus. I thought just writing out the idea would get it out of my head, but these types of games are so easy to prototype that I ended up doing that when I couldn't stop thinking about it. While the design doesn't have any dice to roll, there is a deck of cards that players use. The deck has 21 cards, each showing one of the pieces a player normally has playing Blokus. As cards are revealed, each player chooses any of the four colors and colors in that piece somewhere on their sheet. I guess it's more of a "flip and write", but games that use this mechanic are still classified under roll and write. 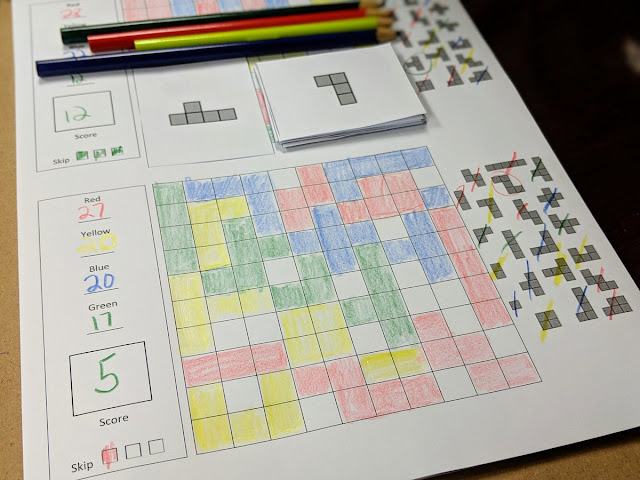 The two major differences between this design and the original, other than there being no physical pieces or board, are: each player is working on their own board and each player is using all four colors. The goal of the game is similar to the original game, to place as many of the pieces on the board as possible. Your score is equal to the number of squares you were unable to place. The player with the lowest score is the winner.

I'm not really sure what to do with this now that I've played it a few dozen times. Mattel owns the rights to the Blokus name so I'd either have to submit it to Mattel to see if they would produce it for their line of Blokus products or retheme it and pitch it to other publishers.

Slice n' Dice
A few days after I designed the Blokus roll and write, I had another idea for a roll and write that actually uses dice. I'm temporarily calling this pizza themed design Slice n' Dice. This design utilizes roll and write and drafting mechanics. During each players turn, they will roll all four dice and then one by one, draft one of them. Once all players have drafted a die, they add that die value to their board in some way. They can either check the box that matches the die's value and color to add that number of a type of topping to a single pizza OR they can write the value in the matching color row of the 3x3 grid. If they can't use the die for whatever reason, they have to take a penalty. 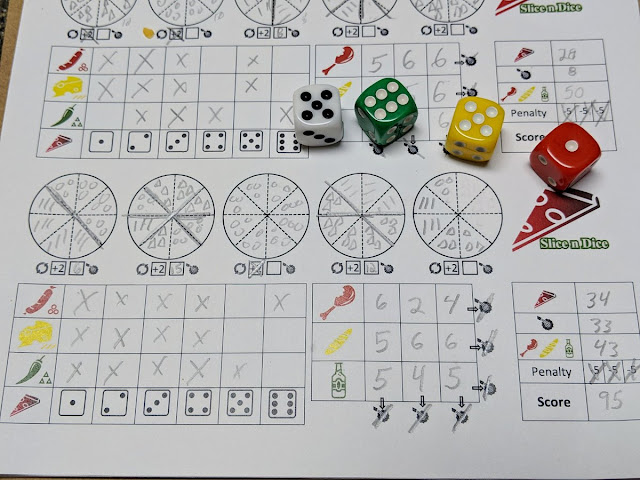 Players get points for completing pizzas, a bonus for using all of one ingredient on a pizza, and the total value of all numbers in the 3x3 grid. When a player fills in a single row or column of the grid, they get access to a pizza slicer that they must immediately use to slice one of their pizzas. When a player is able to separate different topping that are adjacent to one another, more points are scored. The player with the highest overall score is the winner.

At the moment I'm still weighing whether or not I want the design to be straight forward and force players to use what was rolled OR incorporate some dice manipulation abilities by doing certain things. A Twitter poll on the subject was basically 50-50 when I asked what people preferred. So either way, I'll be designing more towards one type of gamer.


I don't have any other ideas or games I'm working on at the moment, so I think I'll just tinker with these and see what happens for now. I think the time away from designing really helped. If you're interested in trying either of these designs out, I'd be happy to get some feedback on them.
Design Tabletop