Summer is coming to a close but August was hot and we were very very busy. I took some steps back on a couple of these, but September is already shaping up to be a big turnaround. Here's how I did in August:

1) Bake more bread from scratch
August has been hot and it was probably our busiest month of the year so I only have a couple of loaves to show. With everyone going back to school and Christine having surgery, I just didn't have the time or the energy to do more. However, as we get into our new routines, I should have quite a bit to share this month. I did a half batch of my usual bread dough so I could work on my scoring.

I wasn't really happy with how either came out, but part of it was due to using a new knife. I'm not making any excuses, I just need more practice. Normally I use a straight blade pairing knife, but this time I tried a serrated bread knife. It cut much deeper into the dough than I was expecting. Even though the cuts weren't as nice I would have liked, the bread itself still came out great. Now that I've got a handle on this basic boule recipe, I want to start exploring some other types of bread. Some rye and whole wheat loaves should appear on the blog soon.

VAST: The Crystal Caverns
I've wanted this game since I saw the original designer start tinkering with the idea of an asymmetrical dungeon crawler on the BGG Designer Forums. I was hoping to get my first play of it with our regular group, but once I started learning the rules I realized that it would make more sense for me to learn each of the characters first. Because the game is asymmetrical, each character has their own set of rules. There are general rules for the game itself, but each characters goal is different as are what abilities they have. So I decided to try a solo version of the game first with Grace by my side. She saw me setting it up and really wanted to play, so rather than discouraging her from playing I let her make the decisions with some guidance. This way I could learn the game, spend time with her, and teach her different decision making techniques. 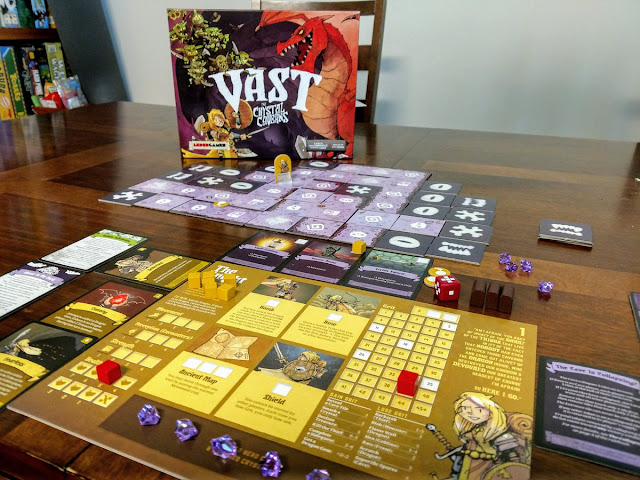 I played as the Knight and her normal goal is to kill the Dragon and escape the cave before it collapses. Because there was no Dragon player, my goal was to find 5 crystals, smash them, and get out before the cave collapsed. What's really neat about the game is how each character has their own player board to track everything they can do as they work towards their goal. The solo version can scale up and down in difficulty which really increase the replayability. Now that I have a grasp on how the Knight works, I plan on playing the other characters solo so I can teach each one of them to a group. I'm so happy that this game lived up the expectations I had for it after just the initial play.

Sprawlopolis
Coming from the same design team as Circle The Wagons, my 2017 game of the year, is the cooperative/solo design Sprawlopolis. It's another wallet game from Button Shy Game that really hit a home run. The idea is that with 18 cards you will build and score a city. Three of the fifteen cards are filled over to show their scoring objective and then you build the city one card at a time. When all of the cards have been played, you score the city and see if you score more points than the numbers shown on the scoring cards combined. I wanted to take a crack at this solo to learn the rules and to get it played before the end of the month. I've since played it at two and four player counts. 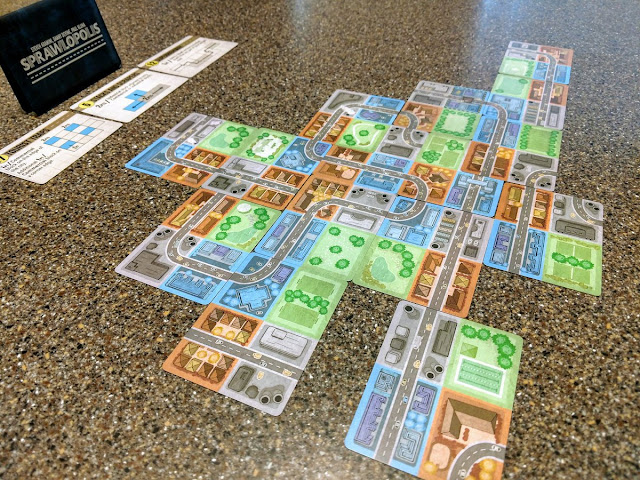 The way scoring works is you score based on each of the three card objectives, add points for your largest section of each of the four sections, and then subtract one point for each road you have. Trying to keep the least amount of roads possible is obviously a good strategy, but concerning yourself too much with it could make you miss valuable points from your scoring cards. The game is far thinkier than I expected it to be in the best possible way. I love when such a small game plays so well. Like it's relative, Circle the Wagons, the replayability is virtually endless because of vast number of scoring goal combinations plus order in which the deck gets shuffled. I'm not big on cooperative games, but I really like this one and the solo variant will have me playing often.

3) Meditate on a regular basis
I took a huge step back on this one. I didn't meditate for a single minute in August. As I mentioned we had an incredibly busy month and I'm back to losing weight, so that's been a major focus of mine. I'm not ready to give up on this resolution because of how important I believe it is. A major reason why I know I need to do better with this one is the amount of times I'm finding myself snapping for one reason or another. I have a short fuse that burns quickly and the only way I've found to slow that burn is through meditation. 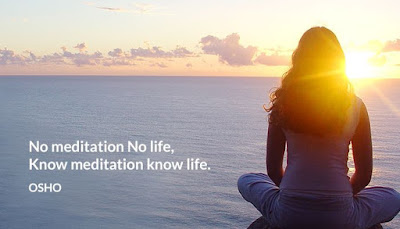 Looking back on the month, the amount of work I took on and being home more than I'm used to were definitely contributing factors. Taking time for myself has to be a priority or else everyone around me suffers. It's not fair to them and it's not fair to me. I'll try the new techniques I wanted to supply last month, this month.
Bread Buddhism Life Resolution Tabletop