The summer is here and I feel like I'm grinding a bit to stay on top of these things. I don't know if it's the heat or just how busy we've been but I'm tired. I'm still plugging along though.

1) Bake more bread from scratch
I almost didn't get anything done for July because we've been busy and it's been so hot that I didn't want to use the oven much. But I had some time this past weekend to get something made. I wasn't sure what to do, so I made the recipe for four one pound loaves that I've been doing. Once the dough has risen, broken it down into four pieces and shaped them with the intention of working on my scoring. 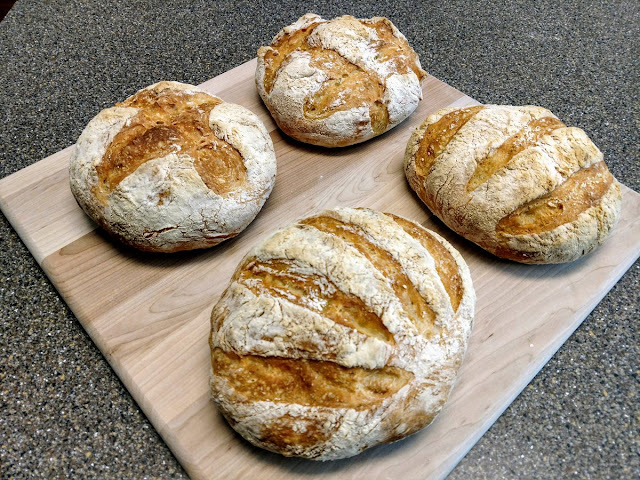 From the top going clockwise, there is a pound symbol, three slashes, scallop, and a plus sign. I wasn't happy with the pound symbol but the other three came out pretty good. I was most satisfied with the scallop design. These smaller loaves baked a lot better than some of the larger loaves I've done in the past. After I took them out to cool, you could hear them crackle so I knew that the crust was perfect.

Cockroach Poker
This game isn't anything like poker and it even says it right on the box. I'm not sure why they chose that name but I'm guessing that since it's a pure bluffing game, there is some comparison. Cockroach Poker is an incredibly simple game made up of 64 cards that feature 8 copies of eight different critters. All of the cards are dealt out and then one player selects a card from their hand and pushes it face down towards another. The player who selected the card announces what the card is and then it's up to the person receiving to do one of two things. They can accept the card and make a decision on whether it is or is not what the person who gave it to them is OR they can look at it and pass it to another player. If they look at it and pass, they can choose to say it's the same critter as was told to them or change it. The new receiver of the card has the same options. But if a player chooses to accept the card and make a guess, they'll keep the card face up in front of them in they're wrong or put if face up in front of the person who passed it to them if they are right. 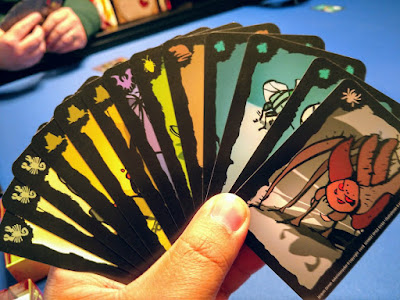 The game ends when one player has run out of cards OR one player has four of the same critter face up in front of them. That player loses and everyone else wins. I knew this game wasn't going to be a favorite of the group, but I bought it because it was super cheap and I've heard a lot of good things about it. I thought it was pretty fun and would work great with the right people. The art is also very neat. Since the game is pure bluffing and near perfect information, I still prefer Liar's Dice if we're going to play something in the same style. I'll probably keep this because the box is small and it will work well with other people I play with.

3) Meditate on a regular basis
My on again off again relationship with meditation is maddening. As I alluded to in my Getting Back On Track post, I need to lock this down. I know I didn't make this goal meditate daily because I knew I wouldn't stick to it, but maybe if I had I would be more inclined to do it. With all of the other changes I'm making right now, I don't want to set myself up for failure. So, I'm going to try my best to do this when I can and not beat myself up over it too much. The traditional sit in a quite space style of mediation is very relaxing, but I've found it hard to find time to do that. 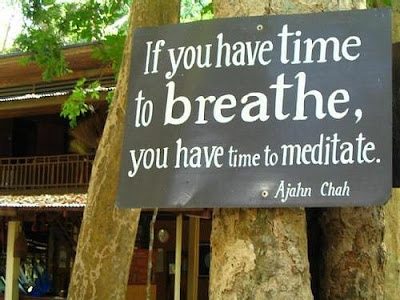 So starting in August, I'm going to try some other ways to see if any stick. Some of those include: walking meditation and breaking it down into small increments throughout the day. Making something a habit allows me to work it into my daily routine. Big changes work better when you start off small and build them up. Going right into sitting meditation like I've been trying clearly isn't working. Taking a different approach will hopefully solve the problem.
Bread Buddhism Life Resolution Tabletop