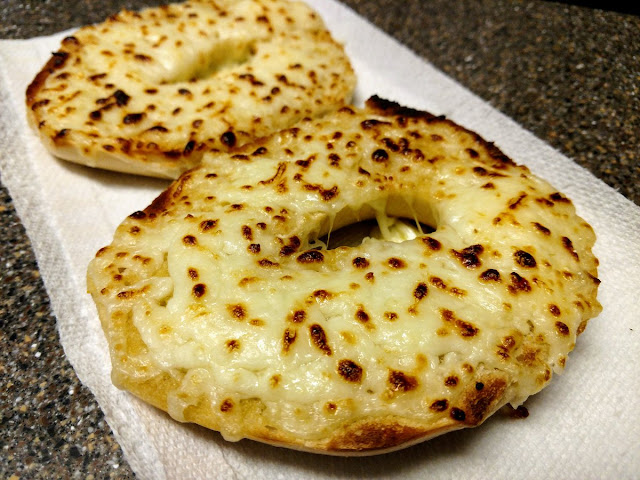 One of my fondest food memories was having a bagel with mozzarella cheese melted on top for breakfast as a kid. It's not a revolutionary thing but it's one of my absolute favorite things to eat. My love of bread is no secret. If you've followed my posts here or on social media, you'll know that I make bagels from scratch a few times a year. That's how much I love them. When I'm not making them myself, I buy them from a local place. It used to be much better before the ownership changed. Now their bagels are big and bready, like ones you'd find at a grocery store. This past weekend's batch was so poor that it looks like I'll need to exclusively make them myself going forward. But that's not the point of this post!

My brother and I coined the term "Mozza Bagel" to refer to this creation that we both enjoy. All you need is a bagel, some butter, mozzarella cheese, and an oven. Cut the bagel on half, spread a very thin later of butter on each slice, top each half with mozzarella cheese, and put in an oven that's been preheated to 400 degrees. Once the cheese has melted, it's ready to eat. It really couldn't be easier. If you don't want to heat up the whole oven or are short on time, there is a quicker way that works just about as well. Start off by toasting the bagel halves then lightly butter and top with mozzarella cheese. Put the bagels under the broiler on for a couple minutes to melt the cheese. Using the broiler allows you to get char on some of the cheese for some added flavor.

A Mozza Bagel draws comparisons to a pizza bagel, for obvious reasons, but they're quite different. For the latter, there's pizza sauce and a topping like pepperoni. One could argue that the former is just another type of pizza bagel but then we're just arguing semantics. A Mozza Bagel has a distinct flavor and set of ingredients. It's those simple ingredients that make a great dish. The bagel is chewy and crunchy, butter adds its wonderful flavor and some moisture, and the cheese brings a salty creaminess. So you have different textures and flavors that push all of the right buttons.

If you've never had a Mozza Bagel, do yourself a favor and make one today. Even if you have to buy Lender's, or some other not really bagels brand, you won't be disappointed. Let me know how it goes in the comments. Thanks for reading and happy eating.