I've found the balance and it stuck throughout May. Now I'd like to increase the amount of each one. Let's see what I got done last month:

1) Bake more bread from scratch
I really wanted to make fried chicken sandwiches on challah bread buns so I took out the two remaining balls of dough that I had frozen and turned them into 8 rolls. Unfortunately, they came out to dense to use for a sandwich so I didn't get to make the fried chicken yet. I should have realized that they wouldn't be light enough after eating the loaves I had made in April. They still were great toasted with a little butter. 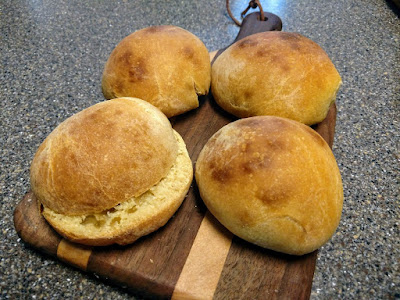 I was going to make Italian bread  for Grace but I kept forgetting to order the couple of ingredients I don't normally keep on hand. But I still wanted to make something so I made a couple small rustic loaves. I didn't realize that I was almost out of bread flour but I had enough for half a recipe. 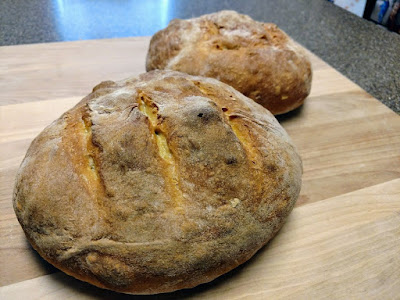 As it turns out, Grace LOVES this type of bread as well. We can't get her to eat regular sandwich bread but she'll eat a whole one of these in a single day if we let her. She isn't a fan of the crust but she does love the crumb with a little butter spread on there. I might try for Italian or garlic knots this month.

Lost in R'lyeh
One of my favorite traditional card games is Palace. The premise is simple, each player has a hand of cards as well as three cards face down in front of them with three cards on top of those face up. Players alternate turns playing cards equal to or higher than the one before it. If you can't, you have to take the whole pile and add the cards to your hand. There are a couple cards that let you reset or remove the pile. The first player to get rid of the cards in front of them after the draw pile is exhausted, wins. 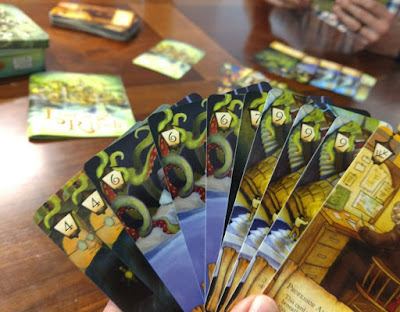 Lost in R'lyeh takes this system and adds some complexity through event cards that give you various abilities. There are also abilities that get activated when different amounts of the same valued cards are played. I picked this up because Ed and I have played hundreds of games of Palace so we're always looking for a twist using the base game. Lost in R'lyeh plays a bit slower because of all of the extra abilities and text that needs to be read but it's still very enjoyable. The tarot sized cards help show off some really great art but they are kind of clunky to play with.

Topiary
The first time I saw the adorable art for Topiary on Twitter, I knew I had to have it. The designer is also the co-designer of one of my favorite games, Circle the Wagons. Danny Devine did the design and some of the art for the game. The idea is that players are coming to a topiary garden to view the beautiful designs. The board starts with a 5x5 face down grid, save for the center piece that starts face up. On a player's turn they must place one of their meeples facing a row, column, or diagonal. Then they may take a face down tile in that row, column, or diagonal and replace it with one from their hand. When all players have placed their meeples, the game ends. 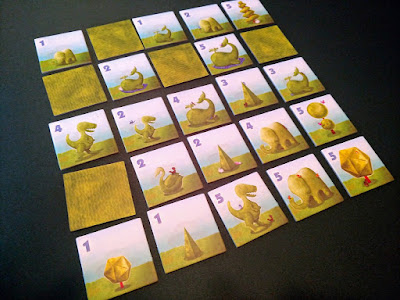 Players score each meeple one at a time to see how many points are in their line of sight. For every topiary they can see, they get the value on the tile(s). However, a meeple can't see past equal or higher valued tiles. So for example: in the bottom row of the picture above, a meeple adjacent to the 1 would only get 6 points for that row because they can't see the second 1 or either of the two 5s past the first 5 tile. There are also a couple of other bonus scoring methods. The player with the highest score wins. I really enjoyed this one because it's very simple to play but very thinky and plays in about 15 minutes. Players have so few turns that they really need to focus on themselves but one could really screw one or more opponent over with a single tile. I can't wait to get this one back to the table.

3) Meditate on a regular basis
Not a lot to report on this one other than I'm getting into more of a groove. My hope is that the update for this resolution gets less and less interesting. I've still been relegated to meditating before going to sleep but it's definitely helping. I'm thinking that waking up just a few minutes earlier would give me time to get a morning session in as well. 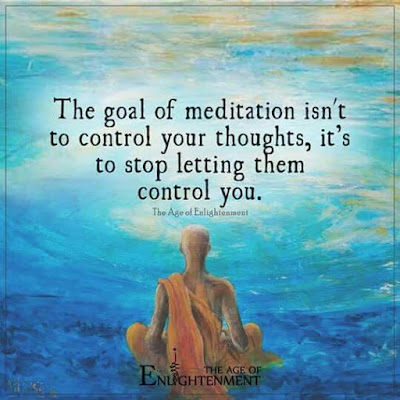