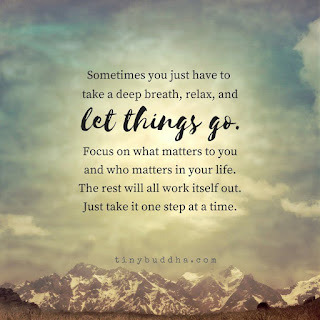 Shitty things happen in our lives sometimes that we have to deal with. I mean, you could choose to ignore them but that's not normally the best or healthiest response. When you're put into a position  that you think is less than ideal, how you choose to resolve it could have consequences if you're not willing to let it go. You could lose out an opportunity, a job, a relationship, or any number of other things. However, maybe taking a stand and be willing to lose out will ultimately be in your best interest.

There are pivotal points in your life where just letting a thing go will make it easier for everyone. But that doesn't mean by conceding your feelings that you aren't going to be negatively affected. Because even though you've let it go, you're still holding on to the thought of what happened. Depending on how dramatic or involved the situation was, it could stick with you for life. You'll look back and wonder if you made the right decision. Alternatively, if you didn't let it go you'll probably continue to second guess yourself. Was it really worth losing something if one of the only benefits was to make that stand?

I know what you're thinking. What are you getting at, Dan? I'm obviously not trying to become a self help author by writing a post telling you how to deal with life. I'm going through a situation at the moment that from the outside, without intimate knowledge of me and the parties involved, would seem silly. It's not the first time I've encountered an issue and I'm sure it won't be the last because that's just how relationships work. In the past, I've let things like this go. I always have and that's because the amount of loss is, to me, almost insurmountable if I don't. That hasn't changed.

The thing is, I'm getting older (33 old...haha) and I just don't have the patience to put up with things like this anymore. I already have a family that I put ahead of myself, I don't have the energy to do that for anyone else. I try to be the best person I can be to others by supporting them in their endeavors, listening when they need it, and making time for them when I can. I don't think it's asking a lot to expect just SOME of that from other people. It's not in everyone's make up to be that way, I get that, but effort is a powerful expression. Just the attempt of doing something like listening, even if you have no way of helping the situation, could mean everything. Take the time, make the effort, just...try.

So do I let this thing go? Only time will tell. The wound is still pretty fresh and just letting it go isn't going to heal it right away. Regardless of how this situation resolves it self, if there is any, the scar will always be there. It'll be a reference point in my life that I'll look back at and wonder if the decision I made was the right one or not. It's already far enough in that it'll become ammunition the next time I feel slighted. I hate that I think about it that way or to know that down the line, I'll probably have to go through something similar.

I want to end this post by saying that a good portion of this situation is on me. It's on me because I'm the one taking issue. I've made it what it is in response to others' actions. So I'm not just standing here and pointing my finger out with blame, I take partial responsibility. How this ends will be dependent on two things: 1) my willingness to let it go and 2) the recognition of fault by others. Until both of those things happen, this will remain unresolved. At the moment of this writing, I have no intention of doing my part first.
Life