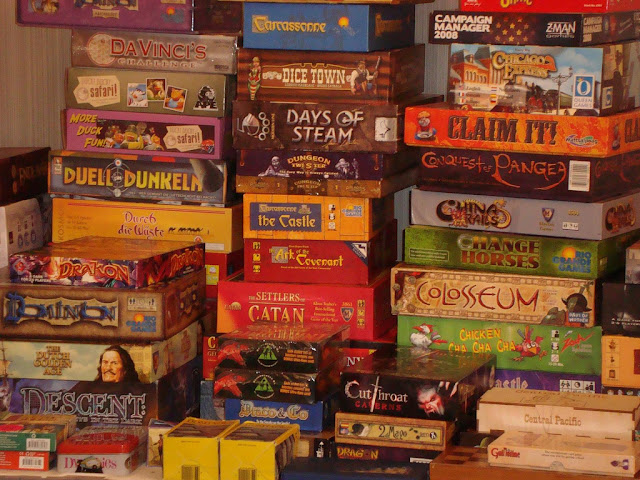 We've all been there before, you're really excited about sharing a game you really enjoy with your group and it goes over like a turd in a punch bowl. You enjoy the mechanic(s) of the game but one or more of the players don't. Some are able to power through to try and win. Others lost interest when you started explaining the rules. In either case, people aren't having fun because it's not the kind of game they want to play.

On the other side of the coin, we've all been that person who has agreed to play a game we know we probably won't like. We do it because that's just common courtesy. There's some reciprocation expected by doing so. I'll play your co-op game if you'll play my hyper aggressive "dudes on a map" game. But even in that situation, everyone isn't happy. Each game shouldn't have one or more people who would much rather be playing something else.

So what's the solution? Probably the closest thing to the perfect fix is that you find a set of mechanics that everyone enjoys and only play games that have them. Now everyone is happy with the selection of games, but then you look at your shelves and see all of the games just sitting there unplayed. If you're lucky enough to have other groups or people to play with, the games will see the table. But what if you don't? What do you do with those games?

Games That Don't Get Played

Owning games that your group doesn't want to play is a bigger problem. Either you know they won't like them or you did play them and they didn't go over well. If you're unable to play certain games for whatever reason, then you're stuck with cardboard and bits that will be neglected. Do you keep them with the hopes that you'll eventually get to play them? Do you sell or trade them and start buying games you know will get played?

Well, there's no perfect or close to perfect answers for those questions. They're decisions you need to make for yourself. If you have limited shelf space, maybe you only keep your darlings; the games you truly love. Over time you'll probably have opportunities, like conventions, where you can find people who want to play those games. If you really don't think you're going to get those games to the table, turn the dust collectors into games that you might like and will get played often. Then be more selective when buying new. There is nothing worse from a buyers perspective than to purchase something that doesn't get used.

Another solution to get your favorites to the table is to grow your group. The more people you have, the higher the chance that your tastes will overlap with others. You'll be able to play games that require higher player counts or play multiple games at the same time while switching up the players after they end. This one is a little bit tougher for a variety or reasons including: space to play, scheduling time that works for everyone, and most importantly, chemistry of the group. That last one is key. Finding a group where everyone clicks can be very difficult.

Of course you can always find another group, but that's not always possible. You may live in an area that's light on gamers (I fall into this category) or you may not be comfortable making new friends (also me). There are a million other reasons why finding people to play with face to face. So my final solution is to turn to the internet. I've written about this in the past. Go read this post to find some really great websites to play games online. A lot of games have some online or app version that let you play with live people

The best part of playing online or through an app is that you get to play the games that your group may not like. I've traded games away that won't get played but I can still play them whenever I want. So I gained shelf space, a game that could see the table, and the ability to play the game traded away. You might even make a friend or two on there. The Board Game Arena community is a really good one. I have people from all over the world that I play with often.

If you're in a situation where your favorite types of games aren't getting played or enjoyed, I hope this post helps in some way. Have any other suggestions? Please share them in the comments. Thanks for reading and happy gaming!
Tabletop