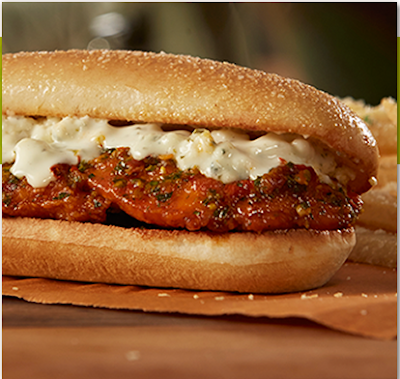 We get a lot of gift cards to big box restaurants for various occasions. I had two of them to The Olive Garden and didn't feel like cooking, so I ordered meals to go. I leave work too early for the dinner menu but that worked to my advantage for the sake of this segment. On their lunch menu are four Breadstick Sandwiches. They took one of their claims to fame, their breadsticks, and combined them with some of their more popular dishes. I've had the chicken parmigiana once before and Christine has had the meatball version a couple times.

I wanted to try something new, so I ordered the Spicy Calabrian Chicken. The description from The Olive Garden's website: "Lightly breaded chicken, fried and tossed in our spicy Calabrian sauce, plus tangy Gorgonzola and a savory Italian cheese spread on our signature breadstick. Served with Parmesan-garlic fries." From a nutritional standpoint, it's far from the worst thing you can order. Eating the sandwich, fries, and salad will set you back 940 calories. That seems like a lot but compare it to some of their pasta dishes and it's a relatively light lunch for a big box restaurant.

My favorite thing about the sandwich has to be its size. The "breadsticks" they use are wider and shorter than the classic breadstick. The chicken is essentially two chicken tenders that have been pounded thin. The entire thing is small enough that Trump could hold it with one hand (Oh Dan...low hanging fruit). This isn't the case for a couple of the others that they offer because of poor construction but they really got it right with this one.

The spice level was a surprise in a good way. A lot of the mass produced food found at places like The Olive Garden is rather bland. The Calabrian is tomato sauce with a combination of chunky vine-ripened New Jersey tomatoes and Calabrian chilis which give off a nice slow heat. While I enjoyed the taste, the spiciness of the sauce overtook all of the other flavors. I wish there was more of both the cheese spread and Gorgonzola to balance out the spice because they were lost; as was the familiar taste of the breadstick.

I was happy with the texture of the chicken and the sandwich overall. The chicken was moist and had a little crunch from the breading. They lightly toast the breadstick to keep it from getting soggy from the Gorgonazola and Calabrian sauces. The sauces and cheese spread keep the sandwich from being dry. So going back to the construction, they did a good job but the ratios were a bit off. It's a sandwich I'd order again but I won't go out of my way to do so.