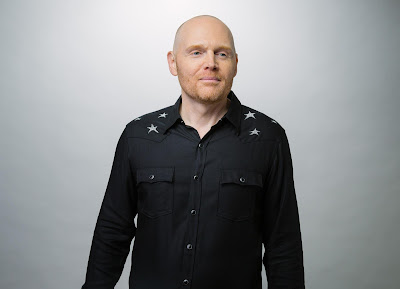 I love to laugh so naturally I'm drawn to stand up comedians, sitcoms, and comedy movies. As funny as ensembles casts are on TV and in cinema, watching a single person stand up on stage telling jokes produces the best and hardest laughs from me. I'll laugh so hard that I'll cry, can't breathe, or even hurt my sides. Nobody makes that happen more than Bill Burr. His brand of angry comedy where he rants about everyday situations absolutely kills me. Rolling Stone magazine called him "the undisputed heavyweight champ of rage-fueled humor". That couldn't be more true. Here's an example of said humor:
On The PF Collective, we do a Top 5 topic every week and earlier this year we ranked the best stand up comedians; Bill was obviously my number one choice. His stand up is great but another big reason for that is his Monday Morning Podcast. Twice a week (Monday and then Thursday for the Thursday Afternoon Just-Before-Friday Monday Morning Podcast) he jumps on just to "check in on ya", talking about current events, things going on in his life, answer fan questions, and do the best ad reads you'll find on any podcast. On Monday's he does at least an hour of material and then follows that up on Thursday with around thirty minutes more. After the new stuff on Thursdays, you get half an hour of clips from old episodes.

Between his style of comedy and the amount of content he produces, I think he's one of the best comedians of all time. If you like to laugh and have never seen any of his stuff, please check it out because he's hilarious.