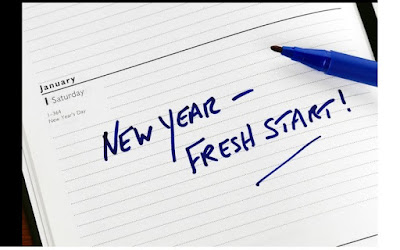 I was bold setting six resolutions for 2017 and really have no excuse as to why I wasn't able to get all of them done, other than I just got lazy. I did complete three of them after squeezing in a couple of games with Christine on New Year's Eve to get the third one done. This is what I wanted to get done last year:

By the beginning of October, I had already completed number one. Shortly after, I read the sixth book to complete number two. As I said before, I just squeaked in number six with only hours to spare. Numbers three, four, and five would have been so easy to do but I just never got around to them. I thought about rolling them into this year but decided against it because I really want to focus on the three I have selected for this year. Hopefully, I do those things anyway.

A few weeks ago I really started to think about what resolutions I wanted to set for this year. Had I not, I wouldn't have completed that last resolution for 2017. I knew I wanted to choose three things that would challenge me and also be a great source of blog worthy material. So I've come up with one food related, one board game related, and one personal health related.

1) Bake more bread from scratch
If you know me well, you know about my affinity for bread. I've loved bread for as long as I can remember and take any opportunity to enjoy some. I make fresh bread or bagels every once in a while but I would like to learn more and become better at it. I have a few techniques down but there is always room for improvement. My plan is to make fresh bread of some fashion at least once a month. I wanted to start the year off on a good foot so I made a couple of basic French loaves yesterday to go along with the batch of tomato sauce that I made for spaghetti dinner. 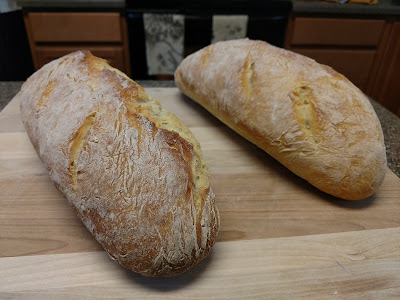 My scoring needs work and both loaves had semi blowouts on along the interior sides facing the inside of the pan. I'm not sure if that's normal or not since I've never used that type of pan before. I normally do free form or use a traditional loaf pan. It still tasted great and Grace had four or five slices throughout the day. I say that because she won't eat store bought bread. I think I'm off to a good start and can't wait to do more posts about future loaves.

2) Have no unplayed games when 2018 ends
Over the past three years I've made a conscious effort to play my unplayed games. In 2015 I didn't reach my goal of playing 15 of them but I did get to 16 and 17 in 2016 and 2017, respectively. This year I don't even have enough unplayed games to make an 18 in 2018 list so my goal is to knock out the remaining 16 games plus any I should acquire throughout the year either through purchase, trade, or gift. This will be no easy task because many of them are either a) longer games that take over an hour to play or b) aren't group friendly (have mechanics that others don't enjoy). With James getting older, getting back to gaming every other weekend with friends should be possible very soon so I'm optimistic I can get this one done.

3) Meditate on a regular basis
This is a life resolution more than one just for 2018. I've talked previously about meditating off and on throughout the years but after doing it for a small chunk of 2017, I want to dive in deeper. Some of the books I read in 2017 for the "read 6 books" resolution were about different Buddhist beliefs and practices. The ones on Zen Buddhism really spoke to me and guided me into doing meditation daily. Around the time the baby was born, I stopped because I was both tired and constantly busy, or at least that's what I tell myself. The truth is I got lazy and just stopped but my body and my mind noticed. I felt better both physically and mentally when I was meditating each morning. It was normally only for 10 minutes but it made a huge difference. I need that difference in my life and I see that now. I meditated for a few minutes yesterday, did so again this morning before getting ready, and will do it tomorrow and the next day and the day after that. Will I do it everyday? Hopefully but if I can keep it going a few times a week for the whole year, it'll be an amazing start to something big for me.

I will be doing at least one monthly update here on the blog, which will keep me honest and accountable. I hope you have some plans for yourself for this year and I wish you the best of luck. 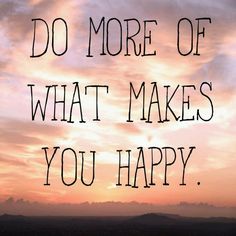