Join the future, embrace The Spork.

November 13, 2017
Can you eat soup with a fork? Not easily. Can you eat a leafy green salad with a spoon? Only if you don't throw the salad across the room in a fit of rage after dropping the same piece of lettuce over and over and over again. So both the fork and spoon do things that the other struggles with. But what if we replaced them with a tool that can do both of their jobs just as well? The spork is that tool. 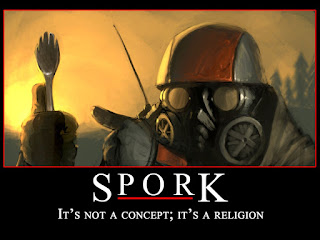 For millennia the trio of knife, fork, and spoon have been apart of the standard place setting. But why? The obvious answer is that they all seemingly have their place. The knife is used to cut foods down into manageable sizes. The fork is used to hold down foods being cut and to bring the food to our mouths like civilized individuals. The spoon is used to stir and bring liquid foods like soup or semi solid foods like pudding to our mouths without making a mess. But let me tell you why we should embrace the spork.


What is a spork?

A spork is a hybrid piece of cutlery that combines the tines found on forks with the shallow scoop of a spoon. It's origins date back to the early 18th century and by the mid 1900s began being produced en masse commercially. They are produced in all sorts of materials, like any other utensil, such as: plastic, stainless steel, aluminum, and titanium. 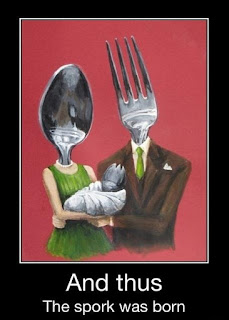 It stabs, it scoops, it does it all.

Since the spork has the ability to stab foods that need to be stabbed and scoop foods that need to be scooped, it's the optimal utensil no matter what food you're eating. When paired with a knife, it can be used to hold down a chicken breast to cut and then, just like a fork, used to bring the cut piece of chicken to your mouth. Have a bowl of soup with your meal? Great, scoop up that tasty broth.

The spork does everything the spoon and fork can do and anyone who says they do both jobs less effective has just used an inferior spork. The phrase "work smarter, not harder" was probably the original inspiration for this utensil of the future. Why fiddle around with multiple tools when one can do the job? 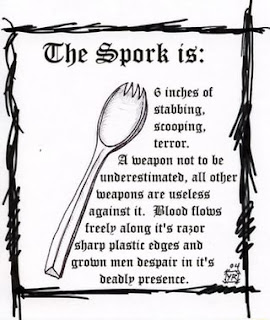 Having one utensil instead of two gives the spork possibly the best argument of all, it creates less waste. Most restaurants provide you with the traditional trilogy of utensils and we're told from a young age not to waste water. So think of the amount of water we'd conserve by washing half the amount of utensils if we replace the fork and spoon with a spork. It's very likely you didn't use one or the other but they both need to be washed for sanitary purposes. Not dining in? You probably received a plastic three pack to eat your meal with. At the end of your meal, you'd only have to throw away two utensils instead of three.

It mat not sound like a lot but when millions of people eat out each day, the amount of water used to clean and thrown away pieces of plastic begin to add up quickly. You don't need to be a green, tree hugging hippie to want to help save the environment so we all can continue to enjoy it.

Like going camping or for an all day hike but don't need the added weight of multiple utensils? The spork is perfect! You could pack cereal or salad. You could make eggs or stew. No matter what the meal, you only need the spork to get you through. Investing in a lightweight but durable titanium one is your best bet. Not only will it save you precious ounces of weight to carry, but it'll last you a life time.

The invention of spork inspired all sorts of other utensils. Two of the most notable ones are the splayed and the chork. A splayed is like a spork but includes knife like straight edges on either side to cut soft foods with. It does an okay job being like a spork but the knife like feature takes away from the scoop. So instead of doing two things well, it does three things less than great. Plus how are you going to cut a chunk of meat with one utensil? 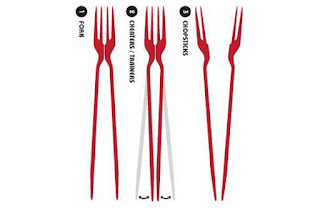 The chork (as seen above) is a combination of a fork and chopsticks. These have been relegated mostly to fast casual eating so far but could start being seen in Asian restaurants of all kinds in the near future. They're like training wheels for your chopsticks that allow you to just give up and eat with the fork side.


One Spork, One World

The spork can be the future. It can be the uniter of all people. It can be the universal utensil. Eating food is one of the only things that every human being on earth has in common. So let us build from that point by accepting the spork as half of the pair of eating tools we need. Bring your forks and spoons to the closest scrap yard and use the money you get back to buy yourself some sporks. There's another benefit, think of all of the extra room in your utensil drawer you'll have. Join the future, embrace The Spork.